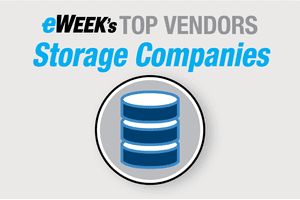 No matter what kind of data a company generates and receives, it has to have a place to live and be safe, and the list of top storage companies here represents the cream of the global crop in this sector.

Storage, along with computing and networking, is one of the three fundamental components of IT: You can’t stay in business without it, whether you’re storing data in machines on your campus or in the cloud. All of these companies offer both of these options, but we’re focusing on physical on-premises solutions in this article.

Deciding which vendor to trust in storage is a long-term strategy because data is a long-term value object for all enterprises. Investments in storage hardware and software licensing can be expensive, so you need to get it right the first time. If budgets allow, buyers of enterprise storage hardware should invest in fast solid-state arrays for use in verticals such as financial services, retail, hosted web services and anything with data analytics.

Slower, less-expensive serial ATA (SATA) storage using hard drives is perfect for general business that doesn’t need to be completed in real time, including the use of data involving human resources, tax records, monthly or quarterly financial closings, and so on.

Vendor reputation is huge in this sector; most companies tend to buy replacements from the original vendor they choose, usually because of efficiency reasons. All of the companies below have improved their security performance over the years, thanks largely to the introduction of artificial intelligence (AI), automation and multi-level security schemes that are now in favor in the markets.

The companies on this list own in aggregate about 90 percent of the enterprise data storage hardware market. They also all have connected their cloud storage options to their hardware.

Here are eWEEK’s top storage vendors in 2019, based on revenue, number and quality of products, reputation and innovation track record.

Value proposition for potential buyers: One cannot have a discussion about the world leaders in data storage without starting at No. 1, which is Dell EMC. Since long before the huge $67 billion merger of server and PC maker Dell with data storage giant EMC in 2016, EMC had ruled the roost in this sector—in fact, since 2003. The merged company has continued to maintain EMC’s storage hardware leadership legacy by remaining No. 1 in the external enterprise storage systems market, essentially the arrays that make up a storage area network and/or network-attached storage network. Product lines of note include Isilon NAS storage, EMC Unity hybrid-flash storage arrays for block and file storage, SC series arrays and the enduring VMAX family of products.

To take under advisement: Dell EMC is the largest storage company in the world, thus new customers will have to go through various layers of administration before they determine which people they actually need to deal with.

Value proposition for potential buyers: NetApp, once considered simply a “good little file-server company,” is a true survivor among storage—in fact, all—tech companies, having opened its doors in 1992. It is the largest pure-play independent storage company on the planet. NetApp long ago left its reputation as a storage provider for small and midrange companies to become an international-level storage player and is listed in the top three of storage revenue leaders. The company has more than 100 kinds of storage hardware devices for data centers in its product list; they are all connected by a common operating system and are designed to plug in and work together on demand.

To take under advisement: NetApp has always had the reputation of being a sort of “little brother” to the larger, more well-known companies, such as Dell EMC, IBM and HPE. This is not a “thing” anymore.

Value proposition for potential buyers: HPE Storage, the umbrella portfolio of HPE storage products, wants to be a one-stop shop for all things storage, competing directly with Dell EMC and NetApp. The list includes the full gamut of data storage products: arrays, high-end enterprise online storage, near-online (nearline) storage, storage networking, archiving, deduplication and storage software. HPE has developed many industry-first storage technologies to simplify network storage. The company is a proponent of converged storage, which is storage architecture that combines storage and compute into a single entity.

To take under advisement: HPE may not have quite the number of product options companies such as Dell EMC and IBM have, but it’s working on providing them.

Who uses it: Midrange to large enterprises only; used by storage admins, IT managers, CTOs

Value proposition for potential buyers: IBM, like Microsoft and other long-established vendors in other sectors of IT, was slow on the uptake when needing to modernize its product line to solid-state storage arrays a few years ago. It waited until the market spoke, and only then—after a couple of important buying cycles—did it come to fully embrace flash in its arrays. Two years ago, the venerable company announced a big push into NVMe-based storage in a bid to keep moving the enterprise storage performance forward. Now, with the engineering might and full force of the global organization behind it, IBM has gone full-force into flash storage and is equipping all its data centers around the world with the super-fast data-moving storage tech.

To take under advisement: IBM wants to let everyone know that it can handle any size of business, and it can. But for a smaller local company, it probably would be overkill to invest in an IBM storage hardware solution. Also, because IBM has so many other businesses and does not concentrate on storage only, it may be a little difficult to navigate through to the right company representative—at least at first.

Who uses it: Midrange to large enterprises only; used by storage admins, IT managers, CTOs

Value proposition for potential buyers: Veritas is a long-established, highly trusted data storage provider with a long list of loyal clients, including the U.S. government, the military, scientific installations and health care providers. The company went private in 2015 and separated from Symantec following a rocky 10-year relationship with the data security provider, and it’s turned out to be a good thing. Founded in 1983 by Eli Alon and Dale Shipley (both from Intel) and Stanford professor and entrepreneur Mark Leslie as Tolerant Systems, Veritas was one of the first providers of data backup and recovery, now a required feature in all storage. It has a global clientele of about 50,000 customers.

To take under advisement: Veritas has long been the kind of company that relies more on word-of-mouth than on heavy duty marketing and advertising. Thus, it doesn’t have the overall visibility that many of the companies on this list have. But that doesn’t negate the quality of the products and services it offers.

Who uses it: Midrange to large enterprises; used by storage admins, IT managers

Value proposition for potential buyers: Hitachi Vantara, started in September 2017 as a wholly owned subsidiary of the global Hitachi Ltd., is now showing its own storage-business personality. The corporate move hooked up Hitachi Data Systems (HDS) with Pentaho and the Hitachi Insights Group to create a subsidiary focused on data integration, internet of things (IoT), big data analytics and enterprise storage. This is now a formidable competitor to the top four companies in this list.

To take under advisement: Hitachi has a global reputation for good quality hardware; not so much for software and services. It has never been up to the quality/performance levels of the three or four leaders in this segment, but it is trying to remake its legacy with Vantara, and it is indeed making strides toward the top of this list.

Who uses it: SMB,midrange to large enterprises; used by storage admins, IT managers