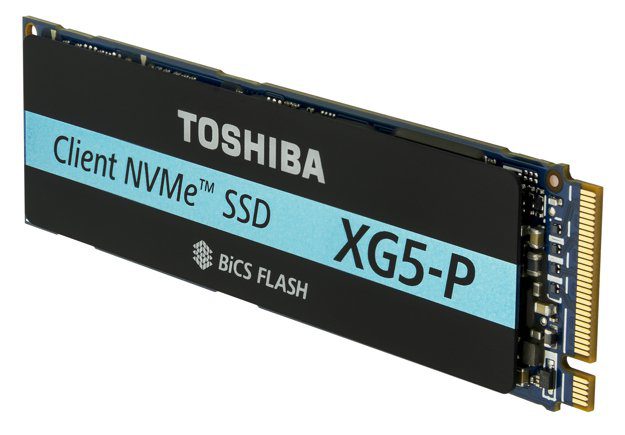 The new XG5-P, made available Nov. 30, is a premium sub-series storage disk that doubles the capacity over previous XG5 SSDs, TMA said. The company also said it is pre-tuned to improve full-access range random read/write performance by up to 55 percent.

TMA said the XG5-P series is designed to meet the needs of demanding PC, gaming and content delivery workloads. It provides up to 2TB of storage capacity while maintaining the performance of ultra-thin, high-speed storage with power efficiency.

The XG5-P features a PCI Express (PCIe) Gen3 x4 lane and NVMe Revision 1.2.1 interface. The new SSDs deliver performance reaching up to 3,000 MB/sec of sequential read and 2200 MB/sec of sequential write. It also brings up to 320,000 random-read and 265,000 random-write IOPS. Power efficiency was maintained to achieve these data transfer rates; TMA claims that XG5-P SSDs consume less than 60mW of electricity.

Some technical information: As Toshiba’s first 2TB M.2 SSD, the XG5-P series utilizes an in-house-developed 1TB package solution that offers up to twice the maximum storage capacity of the standard XG5 series on the same 2.23mm thick single-sided M.2 2280 module.

The XG5-P series will be available in 1TB and 2TB models. Self-encrypting drive (SED) models supporting TCG Opal Version 2.01 also will be offered.