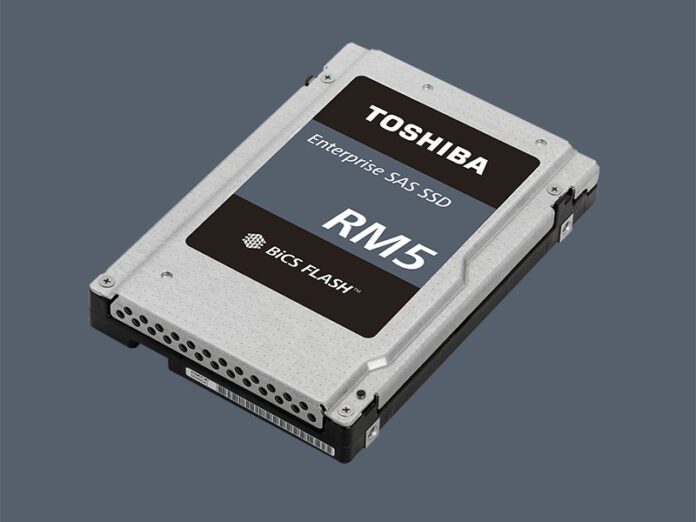 Toshiba is all about enabling its customers to maintain their legacy server hardware by making solid-state disks that turn conventional servers into new-gen servers.

The U.S.-based subsidiary of Toshiba Memory Corp. wants to make life after SATA (serial ATA) disks an unruffled experience for all storage admins. On June 18 the company launched what it described as a new category of SAS (serial-attached SCSI) SSDs designed to replace SATA (serial ATA) hard disks or SSDs in server applications. It’s called the RM5 line.

As a refresher: Serial ATA is a computer bus interface that connects host bus adapters to mass storage devices such as hard disk drives, optical drives and solid-state drives. Serial Attached SCSI (SAS) is a point-to-point serial protocol that moves data within SATA to and from computer-storage devices that include hard drives and tape drives.

Why SATA is Starting to Phase Out

“SATA has no official roadmap, and it doesn’t look like it has much more development happening to it after its 6Gb version, so we’re looking at the market after SATA stalls out and sunsets,” Cameron Brett, Toshiba’s Director of Marketing, SSD and Storage Solutions, told eWEEK.

The RM5 drive is what Toshiba is presenting as the next logical step up for those folks in the business of keeping their storage facilities fast and up to date.

“RM5 is a 12Gb, single-ported SAS drive, so it’s unique right off the bat—it doesn’t have dual ports,” Steve Garceau, Toshiba’s Enterprise SSD Marketing Director, told eWEEK. “How’s it different from our standard high-end products? This is optimized for power, performance, capacity and endurance to align with those server sweet spots that have been historically been addressed by SATA SSDs.

“We’re leveraging our 64-layer 3D NAND, it allows us to hit capacity points as high as 7.68 terabytes, and we go all the way down and start at 960GB.”

Homogeneous SAS environments have long been the standard for enterprise server and storage in data centers. With vertical integration expertise in NAND flash, firmware and controller design, Toshiba is using its position as the world’s leading producer of SAS SSDs to optimize the RM5 lineup to close the cost gap with SATA, thus ushering in a new class of SSD.

Toshiba’s RM5 vSAS series seeks to provide a cost-effective and higher-performing product to overcome the bottlenecks that are inherent with SATA today. Where SATA drives often use SAS expanders to scale out, Garceau said, RM5 enables the use of native SAS from end-to-end, eliminating the need for protocol translation to SATA—and ending that familiar data roadblock. Users can now realize up to 4x performance throughput superiority over SATA, Garceau said.

Featuring Toshiba’s BiCS FLASH TLC (3-bit-per-cell) 3D flash memory, the RM5 series will initially be available in capacities up to 7.68TB with a single 12Gb/s port, SFF-8639 connector and in a 2.5-inch form factor.  This enables it to replace any hard drive or SDD at the same size—with little or no reconfigurement code required.

Toshiba is demonstrating the RM5 at the HPE Discover conference in Las Vegas, which continues through June 20. at booth #196 and conduct several speaking sessions. Demos will include Toshiba’s PX05S workload study on an HPE ProLiant DL380 Gen10 server, and U.3 showing SAS, SATA and NVMe drives in the same drive bay with Toshiba PX05S and presented by HPE and Broadcom.