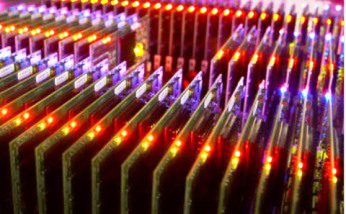 To the surprise of no one in the know in the storage business, Hewlett-Packard didn’t make news Oct. 22 by stating in a 10-word email that its first-string solid-state storage strategy going forward will consist of its 3PAR storage line.

“HP 3PAR is our strategic direction for solid-state storage,” HP’s statement to eWEEK, in its entirety, reads.

Duh. This is not huge—or even middling-size—news, although Bloomberg News, Reuters and other media companies shouted it from the highest mountain on Oct. 22 as if it were. Does anybody think for a moment that HP slogged through a bidding war with Dell and shelled out $2.35 billion in September 2010 for a company if it wasn’t going to be a major cog in its business? Don’t think so.

In fact, many storage industry veterans thought HP overreached for 3PAR, which in 2010 was a bright startup but struggling because it didn’t have the worldwide branding, channel and sales power that a company like Dell or HP could provide. Dell’s original offer was for a relatively paltry $1.15 billion, which appeared to be a fair price at that time.

3PAR investors enjoyed quite a party when the final acquisition price—double what they had expected—became reality.

That all being said, how does this 10-word statement affect other HP storage partners? One of the keys here is another upstart, Violin Memory, which is building a reputation of its own as one of the top 10 leading solid-state-only storage providers. Does this mean HP is leaving Violin out in the cold and focusing only on its in-house storage provider, 3PAR—which uses both solid-state drives (SSDs) and Serial ATA hard drives, and mostly hard-disk drives (HDDs), in its mix?

Of course it doesn’t. As many customers as there are, so are there almost as many use cases and storage service requirements. A company like HP cannot have too many options to provide to its hundreds of thousands of customers around the world.

Violin’s NAND flash and dynamic RAM-based storage arrays are ideal in environments that need fast processing and analyzing of large data sets. 3PAR can handle some of those use cases, but it does not specialize in storage of high-transaction workloads. You’ll see 3PAR hard at work in places like DreamWorks’ super-powered filmmaking data center but not necessarily in a stock market storage application.

More and more enterprises in all markets are either considering adding solid-state options or currently testing them in their own data centers. Numerous analysts have written that the ramp-up for this will continue for months to come.

So if you see a headline today that screams about HP discontinuing its reseller agreement with Violin, pay little heed, even if it’s from a solid source. HP would be ill-advised to rely completely on 3PAR for all its storage customers—mainly because it doesn’t have the solid-state chops that Violin has for certain types of workloads. And make no mistake about it: Solid-state is the road where everything eventually will travel.

“The relationship between the two companies remains unchanged,” Violin Memory spokeswoman Suzanne Chan told eWEEK. “The VMA product family (the Violin 3000 and vSHARE software) continue to be available to customers via HP as per the announced relationship. HP engineering continues to certify the VMA with additional servers, operating systems and joint selling and promotions. POCs [proofs of concept] are currently active as are additional HP certifications.”

Rest assured that HP is not going to continue to engineer Violin arrays to its servers if the relationship is doomed.