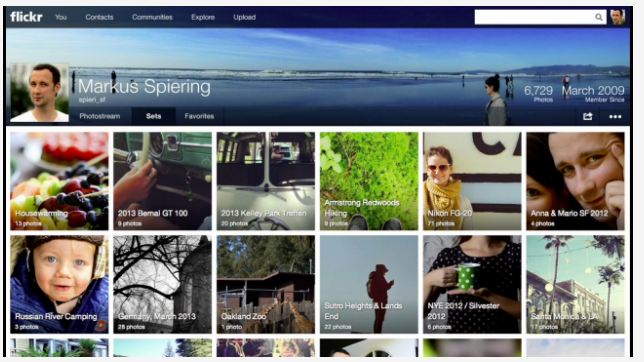 After Yahoo announced early on May 20 that it bought blogging platform provider Tumblr for $1.1 billion in cash, it came out later in the day with more news: It has freshened up its free photo-storage site, Flickr, with a new interface and a full 1TB of storage for users.

The company also revealed that it is establishing an office for 500 employees in the original New York Times building on 43rd Street in New York City.

Up to now, no online storage service–whether expressly for photos or for any other type of file–has enabled users 1 terabyte of free capacity. All others, including those from Google, Microsoft, Dell, EMC Mozy, Seagate, Oracle, HP, IBM, Cisco Systems and many smaller providers, deal in gigabytes only.

Depending upon the resolution of the photos, a terabyte can hold about 250,000 images stored at their original quality, Yahoo said.

“I think that we now have a nice set of what we call the ‘creator’ brands,” Yahoo CEO Marissa Mayer said during the press conference in New York. “These are photographers and other creators who are expressing themselves. There is a natural set of opportunities that arise between Flickr and Tumblr, and we’ll take that as it comes.

Tumblr is a popular hub of user-generated content–it’s hosting 108 million blogs and counting–because users can simply sign up and start using it free of charge in minutes. Users must be signed up to view other Tumblr blogs. It has attracted a generally young user base that uses the platform to post pictures and text on numerous topics, mostly involving music, art and culture.

Flickr also launched a major face lift in its user interface May 20. Since it launched in 2004, the site offered postage-stamp-sized examples of photos in a stream, with lots of white space and captions included; now the site is bumper-to-bumper photos (see photo). Users will have to click on each photo to see the caption information.

Mayer: ‘We Won’t Screw Up’ Tumblr

Mayer, who joined Yahoo as chief executive last summer after helping start up Google, referred to Flickr as a once-shining acquisition “that didn’t fare so well” and promised that “we won’t screw up” Tumblr.

Flickr Product Manager Marcus Spiering said the new Flickr will use new immersive advertising formats that Yahoo is developing. Users who want to opt out of advertising can pay $49.95 a year to access an ad-free version of Flickr, Spiering said.