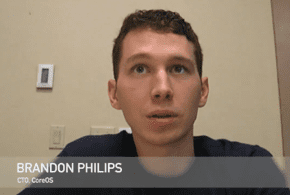 CoreOS is moving forward with its development of the Rocket (rkt) container technology, thanks to some help from Intel. The latest rkt 0.8 release became generally available on Aug. 19, integrating Intel’s Clear Containers technology, providing hardware-assisted container isolation and security.

In a video interview with eWEEK, Brandon Philips, CTO of CoreOS, details the latest development in rkt security and why Docker will still be a key part of CoreOS for some time.

CoreOS develops a purpose-built operating system for container delivery, originally focused largely on Docker. In December 2014, CoreOS announced rkt as an alternative to Docker as well as the Appc container specification. While there was some early anxiety in 2015 over rkt creating a rift in the container community, it has actually led to greater unity, with the announcement of the Linux Foundation’s Open Container Initiative (OCI) on June 22.

While OCI offers the promise of container interoperability, CoreOS is still looking to differentiate its rkt technology. With rkt 0.8, Intel’s Clear Container technology is being integrated, as is support for Namespaces in Linux. Both technologies aim to provide isolation for containers from the host operating system in a bid to improve security.

Watch the full video interview with Brandon Philips below: