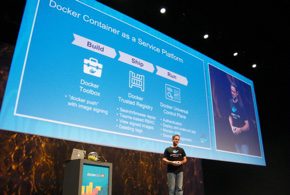 BARCELONA, Spain—Docker is continuing its efforts to dig deeper into the enterprise with the announcement here at DockerCon EU of a new management and deployment service called Docker Universal Control Plane.

For Docker, the typical entry point into an organization is by way of developers, according to Scott Johnson, senior vice president at Docker Inc. The challenge in some cases has been the operations side of organizations, which has responsibilities for control and compliance over deployment.

Universal Control Plane integrates with existing enterprise control sets, including authentication and authorization technologies such as Microsoft Active Directory and Lightweight Directory Access Protocol (LDAP) services. The service also provides access control services for the actual deployment cluster on which the Docker apps will run. Johnson added that Universal Control Plane has a self-service portal that enables developers to see what resources are available to them based on access control policies.

Universal Control Plane is built on Docker technology and, as such, is able to make use of existing Docker services and APIs, including Swarm for clustering, Compose for application composition, and networking and monitoring capabilities.

Docker Inc. recently acquired Tutum, which is a Docker deployment technology. While Tutum provides Docker with new deployment capabilities, Johnson said that development of Universal Control Plane was in progress prior to the Tutum acquisition.

“Tutum refined our thinking in terms of developer-facing workflows,” he said.

Universal Control Plane provides system administrators with tooling to keep deployment under control, while still enabling developers to work at an accelerated pace, according to Johnson.

Universal Control Plane is a commercial service from Docker Inc. that is currently available in preview. Docker is not announcing pricing and packaging at this point, according to Johnson. That said, it’s likely that when Docker does provide pricing, it will be made available in a bundle along with other Docker tools.

“We want to make it easy for enterprises to deploy tools and use them,” he said. “Our products are not siloed, so we’ll be looking to have a full solution organizations can easily purchase.”