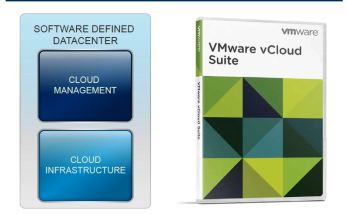 If you thought VMware already had a full-fledged cloud management product in the market, well, it didn’t — until now, that is.

Basically everything VMware makes has a cloud-system connection, but the world’s largest virtualization software maker never had a complete cloud operations suite until it launched vCloud Suite on Oct. 9 at VMworld Europe in Barcelona. “Complete” is defined here as a unified control package for both cloud software management and cloud infrastructure.

vCloud Suite is a master control panel for what IT people — especially VMware marketers — are now calling the “software-defined data center.” Software-defined everything is coming into play: servers, networking, storage and now data centers. This is merely a marketing term, but it also is indicative of the clear trend toward centralized control in new-generation data centers.

“What we are doing here is calling out the key management competencies and capabilities that will enhance that software-defined data center vision,” Mahesh Kumar, director of Product Marketing and Management at VMware, told eWEEK.

With this new vCloud Suite, VMware is also getting a lot more magnanimous with regard to its products plugging into competing data center software components. This will be good news for many IT managers, especially those who have various generations and brands of hardware and software in their data centers and have to port everything together so that it all works.

As opposed to previous versions, vCloud Suite will not lock users into either VMware private or public clouds. vCloud Suite now recognizes and manages virtual machines operating on other hypervisors — hello, Hyper-V, Xen, XenServer and KVM. It can even move workloads to a non-VMware public cloud, such as the world’s most popular one, Amazon Web Services’ EC2.

This advancement has happened in only the last six weeks, Kumar said. The secret sauce to enable VMware to extend its cloud suite’s management capabilities comes from recent acquisition DynamicOps, which the company picked up in July 2012.

“We introduced vCloud Suite at VMWorld in August, and we’ve since added a new app to the suite, vCloud Automation Center, which came from DynamicOps and gives users the choice of provisioning workloads in non-VMware environments, “Kumar said.

DynamicOps was a spinoff from Credit Swisse that made a highly regarded cross-hypervisor management software application. This was the missing link for VMware, it turns out.

vCloud Automation Center enables users to mix and match the following channels: an on-site VMware-based private cloud; a public cloud inside the vCloud suite; and/or a public cloud provider, such as Amazon, Rackspace, Verizon, HP or Microsoft Azure, that uses its own hypervisor approach.

vCenter Operations has four versions: Basic is free of charge; Standard adds capacity monitoring; Advanced includes management of the physical and virtual infrastructures; and Enterprise adds the ability to see application and operating system level operation throughout the infrastructure.