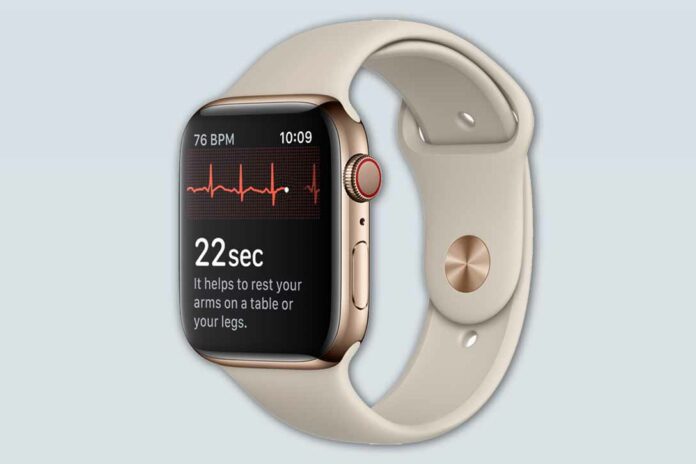 UPDATE: Four days after this review was published, the Apple Watch used in the review stopped working, and there was no remedy readily available. T-Mobile, from whom we purchased the Apple Watch, declined to replace it, so the now non-functional device is being returned.

When cartoonist Chester Gould outfitted his legendary detective, Dick Tracy, with a two-way wrist TV, he had a glimpse of the wearable electronics of the future. But even Gould didn’t foresee a 64-bit computer with a graphical interface, high-speed digital communications, an always-on information feed and the ability to call for help in an emergency.

And yet, here we are with exactly that. Strapped to my wrist, dutifully recording my lack of exercise, noting my failure to walk enough or to stand as much as I should, is a Series 4 Apple Watch that will act as a walkie-talkie or a phone, call for help if I fall, and track my heart rate, warning me if it’s too high or two low. In the process, it’s reached the point where you might want to think about encouraging your staff to start wearing one.

Depending on the work your staff does, the Series 4 Apple Watch can have a useful role in the workplace. The walkie-talkie feature, for example, can allow employees to stay in touch without the need to carry a radio, and without the need to make a cell phone call. You just tell the watch who you want to talk to, and a cellular-equipped Apple Watch can call another one directly.

Of course, the cellular model of the Watch can also make phone calls on its own, without the need for a paired phone nearby. With a paired phone, you can make calls using your iPhone.

And of course, a number of the apps available for the iPhone have versions for the Apple Watch. Those apps can display a QR code for a boarding pass or present financial information or images sent by text message or by email. You can talk to Siri with the Watch, and you can perform searches.

But there are other reasons that a wearable device such as the Apple Watch makes sense to encourage your employees to wear one. For example, there are a number of occasions when it’s important to know if an employee has fallen and might be injured. The Series 4 Watch has fall detection, and it can call for assistance if the person who fell doesn’t respond to the watch within one minute. You can also set the watch so it’ll call your employee’s supervisor in the case of a potential injury.

In the event of such an injury, the Watch will not only make the call, but it will also send the exact location of the employee who fell. In cases where work takes your staff away from your company location, just knowing where the potential injury has happened can make the difference between life or death.

The same is true when an employee has a heart attack or other heart-related issue. The Series 4 Apple Watch can track the health of an employee, and it can note when the heart rate is too low or too high, either of which can be an important sign of impending heart problems.

There’s also an electro-cardiogram app that requires only that you touch the stem with your finger and hold it there while the Watch records your heart activity. This feature requires an app that should be available later this year. Once the app is available, you’ll be able to send a tracing of your heart activity to your paired iPhone, where you can share it with your doctor for a preliminary diagnosis.

While neither of those heart-rate tools will replace a cardiologist, it will provide information necessary to determine if first responders need to come. According to Apple, the FDA has accepted this app as a medical device.

If you haven’t used an Apple Watch before, there’s something of a learning curve. Everything on the Watch itself is controlled by swipes, the turning of the crown or presses on the face or the side button. You can change watch faces using the Watch app on your paired iPhone, and you can add watch apps from there.

Because there’s relatively little screen real estate (despite the fact that the Series 4 has the largest face yet), you may find yourself poking, prodding and twisting as you try to do something with the Watch that you know you should be able to accomplish.

Fortunately, Apple has some excellent videos on its website that will show you the actual steps to take. In addition, there’s a complete manual available on the website as well.

To get the Watch running, start by attaching the watch band and then pair the device with your iPhone. You’ll need to download the Watch app, if it’s not already on your phone. The pairing takes place when the Watch displays a pattern that you look at with the phone’s camera. The Watch will be paired in a few seconds. Following that, you will need to set up Apple Pay if you plan to use it, and you will need to add any apps to the Watch that aren’t added automatically.

The Watch is attractive, with a plain face most of the time. Turning your wrist to look at it also turns on the watch face. Depending on your choices, the Watch may show you the time, and it may also show you anything from the weather to your meetings for the day.

Overall, the Apple Watch is a useful tool for at least some of your staff, and it will allow them to do things they can’t do any other way.