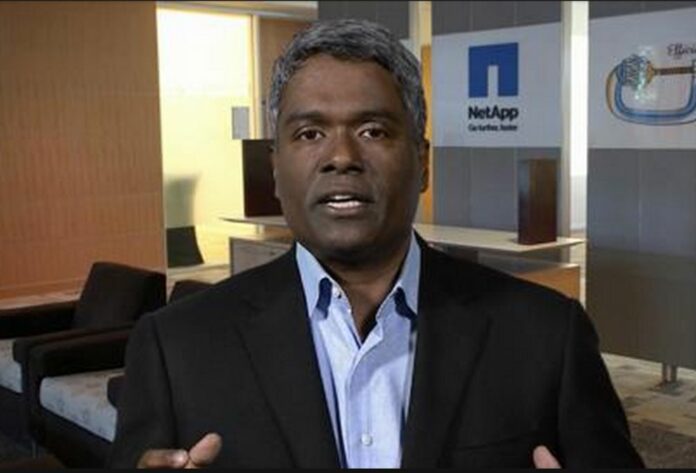 LAS VEGAS—Fifteen months ago, in June 2015, NetApp was up to its controllers in some serious business and market-share issues. The company wasn’t picking up enough new business, customer resistance to new complex clustered storage migrations was causing a slowdown in hardware sales, and revenues were clearly shrinking.

Sales had fallen 2.5 percent overall in 2014 and dropped another 3.2 percent in fiscal 2015; the stock had slipped an alarming 23 percent in a mere six months. Net income was down $62 million in 2015 from the previous year.

The Sunnyvale, California-based storage company, the No. 2 independent storage vendor in the world, was treading water while competitors EMC, IBM, Dell and Hewlett-Packard (now HP Enterprise) were improving their market positions. NetApp, while maintaining its traditionally strong installed base of longtime customers, was stagnating on new product development.

This is not an indictment against the Georgens administration. NetApp had maintained solid sales and market share for most of his six years in the job, but the market itself was evolving fast, with flash storage and array clustering causing major disruptions in normal product buying. Sometimes vendors can’t make adjustments to new products as quickly as customers demand them; NetApp is certainly not the only one to experience this.

Georgens later admitted publicly that NetApp had “underestimated the disruption that the transition to clustered ONTAP has had on our direct and indirect pipeline.”

But what a difference 15 months has made. Kurian, with a background that included stints at Cisco Systems, Oracle, Akamai and McKinsey, has brought a fresh energy to the CEO suite and hired some industry veterans who know the storage business—and have some progressive ideas on where NetApp should go next.

The total revenue numbers have stopped falling, and analysts are now expecting the 25-year-old company to rebound next year—if not this year—back into growth mode.

‘We Were in a Deep Hole’

“The last two years have been pretty fascinating years. If you look back, we were in a deep hole,” Executive Vice President Dave Hitz, one of the founders of NetApp and author of the book “How to Castrate a Bull: Unexpected Lessons on Risk, Growth and Success in Business,” told eWEEK. “We were just at this Insight (in 2014) announcing cloud (products) that we were just starting to dig on. We did have ONTAP running in Amazon virtual machines products, so it’s not like we didn’t have anything. But we didn’t have enough new stuff.

“All-flash arrays were the big rage, and we didn’t have one; the conversion to clustered ONTAP was very early days, and we had a lot of issues ahead of us. Clustered ONTAP for us was like Windows NT for Microsoft; if you don’t pull it off, it’s a company-killer.”

Looking at where NetApp is today, the picture is very, very different. A full 85 percent of the systems the company is shipping now include Clustered ONTAP management software, which enables storage administrators to deploy both SAN (storage area network) and NAS (network-attached storage) workloads on a unified architecture behind a centralized control platform.

This, it turns out, is what enterprises want: one storage system that can control all types of workloads, whether on premises or in the cloud—even in several clouds, if need be—and can work with other data center components without needing a lot of script-writing, system babysitting or other special attention.

How Did the Turnaround Start?

How did this huge turnaround begin? Turns out that the company was on the verge of releasing a group of important new products when Kurian took over. For the new CEO, it was largely a case of good timing—as in right time, right place.

“Clustered ONTAP still represents less than half of our installed base, and companies live on revenue, not installed base. But the fact that we’re selling Clustered ONTAP in 85 percent of our products says we know how to do it and that the engineering work is there and that’s it’s solid,” Hitz said. “What that means is that the ONTAP engineers can go off and do other kinds of innovation.”

With recent iterations of Clustered ONTAP storage, NetApp has added new efficiencies, including compaction of the memory pool in the operating system and having all the storage efficiencies (deduplication, compression and compaction) turned on by default. Users appreciate the added intelligence in the product.

Compaction isn’t a term one hears very often in IT. Wikibooks describes it this way: “As a memory pool is allocated from, over time the pool will become fragmented. Some objects from the pool will be allocated surrounded by objects that are not, in seemingly random order. Memory compaction is the process of moving allocated objects together and leaving empty space together.”

Few companies do memory or storage compaction, but NetApp does.

Naturally, NetApp also invested heavily in flash, and amazingly, it has gone—as car testers like to say—from “zero to 60” in about 3 seconds. The company has literally gone from zero income in flash arrays in 2014 to a $750 million annual run rate in 2016 in an unheard-of two years. This is helping the company’s revenue make a big-time U-turn backup.

“That took us from nowhere to pass up Pure (Storage), HP Enterprise and IBM,” Hitz said. “We’re now No. 2 behind EMC. You look at that stuff, and it’s amazing progress.”

EMC, with new owner Dell at the throttle, has to be looking over its shoulder, because the surging NetApp is closing fast in the market research reports.

One of the main reasons behind this fast turnaround is the customer loyalty—NetApp has many loyal longtime customers who simply waited for the new-gen clustered storage systems to arrive and didn’t buy from any other vendor—even when their new budgets enabled them to do so. In many cases, they kept their older NetApp systems in production longer than usual in anticipation of upgrading to the soon-to-come products.

“A lot of these customers are not new to NetApp but are deploying NetApp for new use cases,” said Dave Wright, whose Colorado-based solid-state storage company SolidFire was acquired by NetApp at Christmastime last year. “We are shipping about 60 percent of our FAS (flash arrays) in SAN configurations—a higher percentage than what NetApp has done historically.

“Because of that, NetApp is now the fastest-growing SAN vendor in the market. What this shows is that even though these (flash arrays) aren’t technically new to NetApp customers, they are new to (traditional) NetApp workloads and environments, where a lot of the SAN stuff was running on other people’s gear. But NetApp has been so strong with its all-flash FAS product that now they’re getting the right to run some of those mission-critical workloads,” Wright said.

“It is amazing how fast stuff can change (in the markets),” Hitz said.