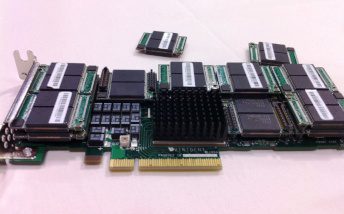 That’s not all. For good measure, Seagate, one of the two largest hard-drive makers in the world (WD is the other), is investing $40 million in Virident for development purposes.

Seagate launched its first NAND flash drive in December 2009. This was about two years after solid-state drives started to make inroads into the enterprise storage market.

Under the new agreement, Cupertino, Calif.-based Seagate immediately will begin offering a complete line of flash-based PCIe solutions to its OEM and distribution partners.

Intel introduced Peripheral Component Interconnect Express (PCIe) in 2004. It is a computer expansion-card standard based on point-to-point serial links rather than a shared parallel bus architecture, and is designed to replace the older PCI, PCI-X and AGP standards.

“Together, we are working to develop the next-generation hardware and software solutions in the PCIe space,” said Gary Gentry, senior vice president of solid-state drives at Seagate. “We believe that this agreement immediately strengthens our position in the enterprise storage market by adding a broad line of Seagate flash-based PCIe solutions powered by Virident to our portfolio.”

Seven-year-old Virident Systems, based in Milpitas, Calif., is backed by strategic partners that include Intel, Cisco Systems, Micron and NEC. For more information, go here.