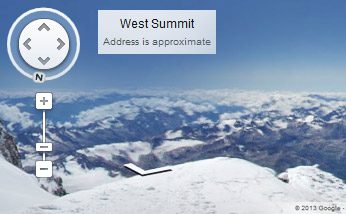 Google Maps Street View has just added spectacular images of the world’s tallest mountain peaks, including Everest and Kilimanjaro, to its ever-expanding collection of photos from destinations around the globe.

The peaks were among destinations that Google’s Street View teams wanted to highlight for some time, Dan Fredinburg, a Google adventurer and expedition team member, wrote in a March 18 post on the Google Official Blog.

“Most of us have a bucket list of the places we want to visit in our lifetime,” Fredinburg wrote. “If you’re like me, the list is pretty long—to be honest I’d be lucky to get to all of mine. Google Maps has a bucket list, too, and today we’re checking off a couple of our favorites so we can make our map more comprehensive and share it with you. And if tall mountains are your thing, you’re in luck.”

The gorgeous new color images were collected by Street View team members who explored some of the most famous mountains on Earth, including Aconcagua in South America, Kilimanjaro in Tanzania in Africa, Mount Elbrus in Russia and Everest Base Camp in Asia, according to the post. “These mountains belong to the group of peaks known as the Seven Summits—the highest mountain on each of the seven continents. While there’s nothing quite like standing on the mountain, with Google Maps you can instantly transport yourself to the top of these peaks and enjoy the sights without all of the avalanches, rockslides, crevasses, and dangers from altitude and weather that mountaineers face.”

Hey, you may not actually feel the wind and elements on your face, but perusing these incredibly detailed images might be the closest you will ever get to actually being on Everest, Kilimanjaro and the rest.

In the images of Russia’s Mount Elbrus, which is the tallest mountain in Europe, viewers can see huts made from leftover Soviet-era fuel barrels that climbers have used as shelters when the weather turns bad during expeditions, wrote Fredinburg. Also featured are images of Argentina’s mighty Aconcagua, the highest peak in both the Western and Southern Hemispheres, where viewers can observe how a base camp is set up among the exposed rock in Plaza Argentina and how people in expeditions eat, camp and prepare for their ascent, he wrote.

Also highlighted in the many images are photographs of Everest Base Camp, where expeditions stage their attempts to reach the top of the world, as well as glimpses of the snow-capped Himalayan mountain peaks and the Khumbu Glacier, Fredinburg wrote.

Amazingly, no special equipment was required to capture all of the images during the expeditions. “This imagery was collected with a simple lightweight tripod and digital camera with a fisheye lens,” wrote Fredinburg.

Sara Pelosi, Google’s people programs manager and a member of the photo expedition team that went out to capture all of the amazing photographs, put together a detailed travelogue about their work in a March 18 on the Google Lat Long Blog.

“I was lucky to be part of the team that traveled around the world to capture the imagery and experience the mountains firsthand,” wrote Pelosi. “I’ve always had a sense of adventure. In 2011, when my colleague asked if I wanted to go on a trip to Everest Base Camp, I couldn’t resist, and we recruited a group of Googlers and fellow explorers to join us.”

The trip was an adventure, she wrote, including 12 days at Mount Everest in Nepal, where the team battled altitude sickness, an earthquake, mud slides, snowstorms and flash floods on their way to reaching an altitude of 18,192 feet, which is higher than anywhere in the contiguous United States. The team hiked more than 70 miles over some 50 hours on that trip, she wrote in her diary of the expedition. The team didn’t hike to the summit of Everest, which sits at 29,029 feet.

“We’re honored to share this amazing imagery with you on Google Maps and show the world what life is like from its highest peaks,” wrote Pelosi in her post.

The new mountain peaks imagery is part of the ever-expanding Street View collection. Last November, Google added photographs of some of the world’s most spectacular ski resorts, while in August images were posted from Cambridge Bay in Canada’s far north.

Another Street View team is presently at work in Japan, taking stark photographs of a city about 12 miles from the heavily damaged Fukushima nuclear plant, which spread its radiation across a wide area after the March 2011 earthquake and tsunami.