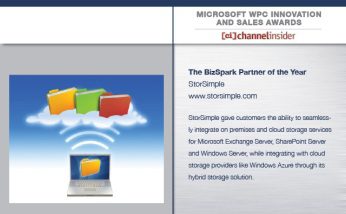 Microsoft has been making storage news for most of the past year, with the launch of the updated SkyDrive cloud storage service, a deal with Symantec to provide cloud-based disaster recovery, and the upcoming Windows 8 release, which will include new storage-related features.

The clear message here: Microsoft, knowing that key parts of its business are going obsolete, is moving headlong into other markets. Storage, of which everybody always needs more, is obviously among them. Gateways to storage in the cloud is another.

With this in mind, Microsoft on Oct. 16 acquired another storage property, StorSimple, which makes cloud-integrated storage appliances for data centers. Terms of the deal were not released.

This acquisition puts Microsoft squarely on the playing field with well-established cloud-service providers such as Amazon, Rackspace, GoGrid and several others. StorSimple is one of the missing links Microsoft needs to fill out its Azure cloud infrastructure platform, which still has a few holes to fill.

Microsoft, StorSimple Have a History

StorSimple optimized its line of appliances for Microsoft applications back in December 2010. So the two companies have a bit of a history together.

Cloud system administrators use products such as StorSimple’s to connect the dots between on-premises and cloud-services storage needs in order to build and operate hybrid clouds that work well for line-of-business users. The appliances are deployed on premises within the data center and store data locally on solid-state drives (SSDs) and in the cloud to offer hybrid storage while maintaining or improving performance.

StorSimple classifies all content to determine whether it is a working copy or an older version. It keeps all working copies on the local drives and automatically migrates all other content onto the cloud.

The appliances automatically deduplicate content, which reduces total storage required by a large margin. Each block is then ranked using StorSimple’s BlockRank algorithm to determine the company’s working set of files that are necessary for everyday operations.

StorSimple isn’t called that for nothing. The machines are plug-and-play, the interface is intuitive, and they can be commandeered by line-of-business employees.

“You may have heard us talk about the Cloud OS over the last few months; the Cloud OS is our vision to deliver a consistent, intelligent and automated platform of compute, network and storage across a company’s data center, a service provider’s data center and the Windows Azure public cloud,” Michael Park, corporate vice president of Microsoft’s Server and Tools Division, wrote in a blog.

“StorSimple’s approach of seamless integration of on-premises storage with cloud storage is clearly aligned with our Cloud OS vision.”