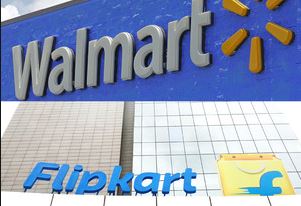 Walmart has been competing hard against No. 1 Amazon for years to be the king of e-commerce in North America. Now it’s decided to find a new way around its rival and conquer a huge market in India.

The mega-retailer revealed on May 9 that it will buy a 77 percent stake for $16 billion in India’s Flipkart e-commerce company. It also said that it will back Flipkart’s goal of going public at some point as a majority-owned subsidiary corporation.

This is the largest acquisition Walmart has made to date (its purchase of European supermarket chain Asda Group PLC for about $10.8 billion in 1999 is No. 2), and it faced stiff competition from Amazon, which helped drive the final price up. However, to put this investment into perspective, $16 billion for the purchase amounts to only 6.5 percent of Walmart’s $245 billion market cap.

This undoubtedly will ignite an international skirmish with Amazon, which already has identified India, the world’s second-most populous country, as the emerging market of the future.

Flipkart has grown markedly in recent years. Its annual net sales grew more than 50 percent over 2016 to $4.6 billion last fiscal year, but the company hasn’t been able to overtake Amazon’s revenue in India’s fast-paced e-commerce market.

“With the investment, Flipkart will leverage Walmart’s omni-channel retail expertise, grocery and general merchandise supply-chain knowledge and financial strength, while Flipkart’s talent, technology, customer insights and agile and innovative culture will benefit Walmart in India and across the globe,” Walmart said in a media advisory.

Flipkart, founded in 2007, was the leader in India’s small but fast-growing e-commerce market for a half-dozen years. But Amazon’s entry into the country five years ago has led to a serious fight to become the dominant player in India.

Reaction from Other Players

eWEEK received some reactions about the deal from other executives in the e-commerce market on May 9. They included:

“Amazon is cloning itself in India, while Walmart goes for an acquisition. The overall experience of Walmart in the U.S. relies a lot in their physical retail presence. Merging this experience with a pure digital player like Flipkart will be challenging but very important to cement Walmart’s ability to land in more regions in the future. This acquisition should not only help keep Amazon in check, but it will be interesting to see how much of Flipkart’s buying experience is incorporated to Walmart worldwide and vice versa.” —Nicolás Avila, Vice President of Technology, Globant

“All of the major e-commerce players are competing for every transaction. Walmart is looking to grow its online channel by buying into the early stages of e-commerce in India. With a country of 1.3 billion, e-commerce is just now scratching the surface. Amazon already has a substantial foothold in India at 27 percent market share, and Walmart knew it needed to get into that market prior to Amazon either acquiring Flipkart or taking market share away. By acquiring Flipkart, Walmart has become the leader in e-commerce in India. Amazon has committed $5.5 billion to India, so it was only a matter of time before it took over as the leader. If Walmart didn’t make this move now, it would be likely spend way more to get into the market.” —Dan Neiweem, Co-Founder and Principal, Avionos