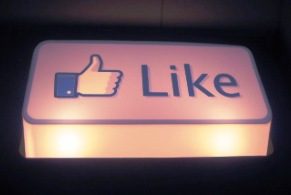 Q: When does “thumbs down” mean something other than “No way,” “Wrong!” or “Dislike!”

A: When Facebook interprets it as a symbol of empathy — i.e. “Sorry” or “That’s too bad.”

Facebook is working on deploying a thumbs-down button, but it’s not a sure thing that it will be added to the social network. However, it is a certainty that a button that is the opposite of “Like” will be interpreted in as many different ways as there are Facebook users on the planet — and that’s about 1.4 billion at the moment.

Putting a thumbs-down button into its pages undoubtedly has been discussed at Facebook since the thumbs-up button was turned on. The subject came up the other day at one of Facebook’s now-and-then virtual Town Hall-type meetings at which CEO and co-founder Mark Zuckerberg fielded a question about whether such a choice was ever going to happen.

The fact is, Facebook does have it ready to go if needed, and the company is floating the idea to see what results it might bring.

Deploying Such a Button would Mean Additional Revenue

Look at it from the business side: Having a control like this could mean a lot of additional income for the company, due to the added data — and data granularity — and to give existing and emerging analytics platforms a stiff push forward.

In other words, having a “No way!” indicator like a thumbs-down button is simply another method for Facebook to harvest a lot more data to sell. You just know that a lot of people will use it — probably more than thumbs up, because our 21st-century culture is a lot edgier than it used to be.

But Zuckerberg didn’t present it in that fashion. At the town hall meeting, he said: “We didn’t just want to build a dislike button just to have one. We don’t want to turn Facebook into a forum where people are voting up or down on people’s posts. What they really want is to be able to express empathy. Not every moment is a good moment, and if you’re sharing something sad, then it may not feel comfortable to like that post, but your friends want to express that they understand and that they relate to you.”

Zuckerberg described the task of creating such a button “surprisingly complicated to make an interaction that you want to be that simple.” He didn’t elaborate.

Lots of Talk on the Network

Naturally, there were lively conversations Sept. 16 and 17 all over Facebook on the topic. On a personal level, most people with whom I interact on the network were clear that they don’t believe Facebook should make this move.

John Furrier, CEO and co-founder of SiliconAngle live Webcast and consulting company, who also runs the CrowdChat interactive online forum, posted: “I am making a prediction Facebook will NOT come out with a DisLike Button — this will not be good for FB. It will turn them into Quora or Reddit — it will stifle conversations and turn posts into bipolarized hate feeds. Voting up or down is different than Like and Dislike in context to Facebook. If Facebook added voting to sort threaded responses then that is different. Dislike to show empathy is something orthogonal to the notion of Like, imho.”

More bipolarized hate feeds than there are already? Hmmm.

Larry Magid of CBS News, a Facebook user and also a member of the company’s Safety Advisory Board, wrote in his Fortune blog: “I fully agree (with Zuckerberg). There have been numerous times that I’ve seen posts about bad things — the death of a loved one or news of a tragic event. I might not have wanted to write a comment, but I did want to say something like “I hear you” or “I feel for you” or just “I care about what you are saying. But, because those options don’t exist, I’ve defaulted to the “like” button or — worse — didn’t respond at all. Of course I don’t “like” someone else’s bad news, but what I’m really saying, I guess, is that I like the fact that you are sharing this and wish you the best.

“There are better ways to say this and I think Facebook is in as good a position as anyone to come up with some alternatives.”

Good Reasons Not to Do It

Mark Finnern posted: “Independent of Facebook, when you create online communities, you shy away from the “dislike” or “down-vote.” Reasons have been mentioned earlier in the thread. Still, there is value in the ability to mark things that are not welcomed in that community.

“I would like to see a “Really?” button implemented. It only registers when you make a more-than-one-word comment as a reason why you are not happy with the post. Therefore the original poster as well as others can engage in a dialog around your objection. Therefore no drive by down-voting would happen.”

My take: Maybe we’re making far too big a deal about such a button. It may be inevitable.

The last word here belongs to Nicolas Popp, who posted: “A dislike button would be a huge hit in France!”