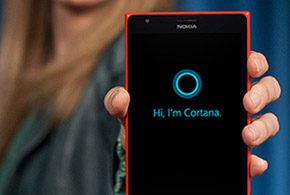 Windows 10 users will soon have a new ally in helping to preserve professional and personal relationships.

In an upcoming update for Windows 10, which is currently rolling out to members of the Windows Insider early-access program, Microsoft is upgrading its virtual assistant technology, Cortana. It will soon gain the ability to keep track of a user’s obligations and suggest reminders, announced Marcus Ash, group program manager for the Microsoft Cortana group, today.

Debuting in Windows Phone 8.1, Cortana is Microsoft’s answer to voice-activated digital assistants like Apple Siri and Google Now. Powered by Microsoft’s cloud and the Bing search engine, the technology has since been ported to the company’s flagship operating system, Windows 10. By uttering “Hey, Cortana,” users can search the Web, set reminders, get directions and call up weather forecasts, among several other activities.

“People often make promises to do things in email but may forget about them as the days go by and emails pile up,” Ash wrote in a company blog post. “Microsoft Research (MSR) was pursuing an intriguing and powerful idea around this challenge—automatically recognizing when people make commitments to one another in email messages and providing reminders.”

The feature builds on the company’s work on using Cortana to surface information, such as flight and package tracking, that can get buried in overflowing email inboxes. “We collaborated very closely with MSR to bring this new ability to Cortana to help people better keep track of their commitments,” Ash wrote

Cortana will also keep a closer eye on users’ calendars, offering personalized suggestions based on their schedules and daily routines. “Cortana, like a true personal assistant, is intelligent enough to understand how you may uniquely like to work—including the hours you like to set meetings and those in which you are most productive,” stated Ash. “So if you are a morning person like me, and you get a meeting request come through for 7pm, Cortana will alert you that you have a meeting outside of your regular times so that you can take action quickly to move it to a better time.”

Likewise, Cortana can help users avoid missing last-minute meetings by alerting users “that there’s a meeting that may need your attention, so you can adjust your alarm and morning routine accordingly and stay on top of your day,” he said. Delving deeper, Ash said in a YouTube video that Cortana can also detect meetings that cause scheduling conflicts or if they occur during times devoted to users’ commutes.

Over time, users can expect Cortana to assist with more activities that have an impact on their professional and personal productivity, hinted Ash. “As we look at what a real-life personal assistant can do, we know we’re just scratching the surface of how Cortana can help you be more productive. We look forward to bringing you more features and scenarios that help you to achieve more,” he stated.