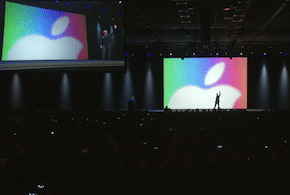 Apple used its 2014 Worldwide Developer Conference (WWDC) to introduce Yosemite, the newest version of OS X; iOS 8, its newest version of its mobile operating system; rumored and expected applications for managing users’ homes and health-related information; and so long a list of additional new offerings and added features that anyone hoping for a bit of hardware news is likely to still feel sated.

Hardware news will wait for the fall, was the message repeated several times by CEO Tim Cook and Craig Federighi, Apple’s vice president of software engineering and the clear star of the show. Federighi did most of the introducing, grinning and audience charming. (One Twitter user asked if Federighi’s silver hair had its own Twitter account just before Apple’s live feed showed a spoof video—in service of a new feature in Messages—that put Federighi’s enviable locks in danger.)

The keynote will certainly be remembered for establishing that Cook—who has been called on to step down, and who at one point during the two-hour event called Federighi “Superman”—has an invigorated and highly competent right-hand man.

The newest Apple OS features design improvements, including updated icons and more translucent application windows that “take on the personality of your desktop,” said Federighi, or at least show a bit of the color underneath, for a calmer, more blended appearance.

Other new features within the OS include:

— MailDrop: To prevent users from receiving a message saying that a recipient can’t receive a message because of its size, MailDrop encrypts it, sends it to the cloud and sends the recipient a link to click to access the content. Now Mail users can send files up to 5GB in size.

— MarkUp: Users can mark up documents, or sign them, using the trackpad.

— Safari improvements include a single, thin bar that leaves more space for content, a search bar that pulls up a user’s favorites and improved energy efficiency to the point that a user can stream Netflix for up to two hours longer before running out of battery.

— Proximity awareness offers continuity between Apple devices. You can start an email on your iPhone, decide you’d rather type on your iMac, and when you walk over and click on Mail, the half-written email is right there, ready to be completed on your desktop.

— The idea of continuity also extends to calls. If your iPhone rings in another room, you can pick up the call on your iMac. Calls can also be placed on the iMac.

— Spotlight has also been improved. Instead of just an on-device search feature, it’s been grown to include tentacles into so much of what a user does. Users can perform searches within it, for example, and more easily share that information with recently accessed Contacts.

Overall, Yosemite’s contribution is that it makes for a more seamless and integrated user experience. Those are words generally overused to the point of uselessness, but here they truly apply. Apple has removed steps, making it simpler, for example, to search for something, share it with a contact, annotate it and email it off, without needing to exit one app and click into another.

Cook called iOS 8 “a giant release,” insisting that it’s “two stories, not one.”

“It has great user features, but also great developer features … so you can build apps that you couldn’t before,” he explained.

Many of these new features will already be known to Android—and even BlackBerry 10—users, but that doesn’t make them any less welcome to the Apple community.

These new features include:

— The ability to respond to a notification—a meeting invite for a text message, for example—without leaving the screen you’re on.

—In group messages, a user can decide to leave a thread or set a “do not disturb” notification when he’s had enough of an engaged conversation keeping his phone buzzing. Users can also share their locations within messages, and a Tap to Talk feature lets a user share a recorded audio file, instead of typing, or even talk-to-typing.

— New enterprise manageability features include a device enrollment program that puts an end to opening a device, connecting it to a PC and then handing it over to an employee. Now, he or she can open a shrink-wrapped box and find their device already set up.

— Health and HealthKit were widely expected. Health offers a single place that multiple apps, such as Fitbit or blood-pressure monitors, can contribute to a user’s health profile. While today this information is in silos, Health creates a complete picture. HealthKit, which includes integration from the Mayo Clinic, can enable real-time feedback and care. If a user takes a blood-pressure reading that’s well above his personal parameter, for example, the app can immediately send that information to a doctor or hospital so that a doctor can reach back to the patient.

— FamilySharing lets up to six members of a family who are sharing a same credit card access the content that other members of the family have purchased.

— Apple is making every photo a user takes available on each of her devices, for a “consistent library.” If you edit a photo on your iPhone, the edits will be in place when you access that photo from your iPad. Everything is stored in iCloud, enabling a user access to more photos from an iPhone than could ever be stored on an iPhone. The first 5GB are free. From there, Apple will charge $0.99 a month for 20GB of storage, $3.99 per month for 200GB of storage and additional tiers up to 1 terabyte.

— Siri will offer streaming support recognition, so you’ll see your words as you speak them, instead of as she’s processing them.

As for the second part of the iOS story—and here Cook shared that the App Store now holds 1.2 million apps, 300 million people visit the app store every week, and 75 billion apps have been downloaded—Apple has done more to make apps easier to find and more compelling to buy.

— There are Explore tabs that break down content by category and subcategory, and searching based on what’s trending.

— Bundles let users buy multiple apps from the same developer at a discounted price. Developers can also include short video features about their apps.

— TestFlight allows developers to invite users to test their apps for free.

— Extensibility enables apps to team up and work together. A photo taken with the iPhone camera, for example, can access filters made available in a photo app, and then be pinned to a user’s Pinterest board. Widgets for apps can also be dragged into the Notifications Center. Federighi showed how an eBay widget could allow him to see that he’d been outbid for an eBay item and so increase his bid without leaving Notification Center.

— Metal, a processor improvement that opens up a new world for developers, delivers a tenfold increase in rendering efficiency.

— And HomeKit is a toolkit for your home. With a command like “get ready for bed,” said Federighi, you can make sure the garage door is down, the security system is activated and the lights are dimmed.

Cook, offering final remarks—and speaking slowly and steadily, seeming like a solid tortoise figure to the quicker Federighi (the hare with the hair?), said that OS 10 Yosemite and iOS 8 exemplify that Apple is a company that makes “devices and services that all work together in harmony.”

We do this, Cook added, “so we can create a seamless experience for users that is unparalleled in the industry. This is something that only Apple can do.”