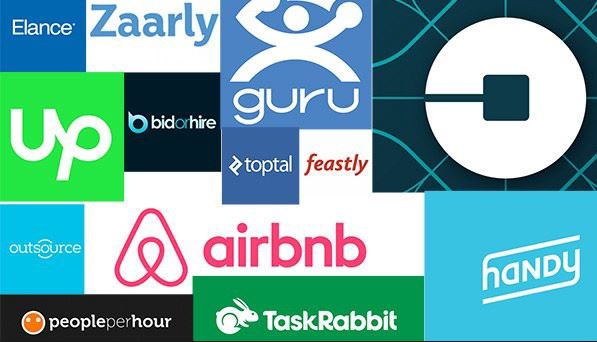 News that so-called Gig Economy standard-bearer WeWork has pulled in another $3 billion in funding from Softbank Corp. may be creating the wrong impression about the economy.

The so-called Gig Economy is defined as a labor market characterized by the prevalence of short-term contracts or freelance work as opposed to permanent jobs.

Ride-sharing, apartment-renting and other hyphenates—many of whose “consultants” and fledgling entrepreneurs are using office-sharing services rather than traditional offices—are garnering the attention and affection of economists, business analysts and media mavens everywhere. But large, traditional companies are still the bedrock of the global economy, according to a new book gaining attention in the United States.

Core Applications as Platforms for Innovation

Thus, it should hardly be surprising that large, established companies are also adapting to changing market realities. Indeed, I’ve been struck by the number of companies talking about moving their IT portfolios to the cloud, largely to get the benefits of agility and new emerging technologies, such as artificial intelligence and machine learning.

“Both customers and executives at Oracle OpenWorld have talked about a growing trend of innovation as a major business driver for cloud application deployments. Historically, innovation has not figured highly in the business case for these projects, particularly for the ERP systems that run an organization’s core business processes; the rationale has been much more about operational efficiency, and modernization of back office functions–something particularly prevalent in HR and finance in recent years.

“Now organizations are looking at their core applications as a platform for innovation, particularly as their digital transformation projects extend deeper into the core. Capabilities such as AI and machine learning, blockchain, and IoT are all seen as opportunities to innovate around products, services and business models. Implementation approaches are changing to match these ambitions, with a move away from lift and shift, and replicating existing customizations in the cloud, to making a fresh start on a modern platform, with a phased agile implementation and a regular and frequent cadence of new functionality.”

Given the shortage of talent and shrinking unemployment rate, it’s no surprise that companies are looking for flexible human capital management software to help them attract and retain talent more effectively.

Companies also see cloud apps as an easy onramp to AI and other emerging technologies.

Mike Marcellin, CMO of networking giant Juniper Networks, called machine learning “the next big frontier. ML could allow us to provide a high level of personalization, delivering the right content at the right time. I don’t have enough marketers to create every single buyer journey and do all the A/B testing that I’d want to do, but the machine can do it very easily.”

Indeed, in a twist on “too big to fail,” it seems that there’s no such thing as “too big to innovate.” Western Digital, which is actually now the combination of three multibillion-dollar Fortune 500-sized companies—Western Digital, HGST and SanDisk—sees cloud as the solution to a potential integration hairball.

“We were looking at rationalizing 3,000 applications across these three companies,” WD CIO Steve Phillpott said. “At a minimum, we had three of every kind of application. But in some cases, we have found dozens of applications doing the exact same service. That’s just not efficient.”

How WD Is Approaching Use of New Apps

Already daunted by the need to put two-thirds of the company through a big change, Western Digital’s leaders decided to look at the question from a different angle.

They realized that with two of the three companies having to switch to new apps, two-thirds of the organization would have to undergo a major change, no matter which application was selected.

“So we thought, if that’s the case, why don’t we look at this as a transformation opportunity and change to a totally new application?” Phillpott recalled. “Yes, that will cause 100 percent of the company to go through a change, but it would give us the chance to make a decision with an eye toward the future and build a foundation for the next 10 to 15 years.”

That long-term view is the vision that matters—especially for established companies already contributing so much to the U.S. and world economy. Change has always been a constant, to paraphrase the pre-Socratic philosopher Heraclitus. There seems no doubt that cloud apps are going to be the main instrument of change for companies and individuals who remain influential across the coming periods of change.

Michael Hickins is a former eWEEK and Wall Street Journal editor and reporter. His report is special to eWEEK.