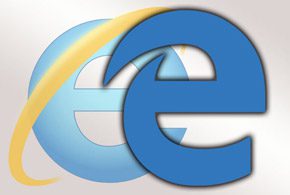 When it comes to Web browsing on Windows 10, Microsoft’s developers are cleaning house. Among the relics of the soon-to-be past is ActiveX.

Arguing that the new Microsoft Edge browser is more than a reskinned version of Internet Explorer (IE), Edge program managers Charles Morris and Jacob Rossi took to the company’s new Microsoft Edge Dev Blog to announce that their group had removed more than 220,000 lines of code, more than 300 application programming interfaces and six document modes from IE’s rendering engine while developing the new browser. In their place, Microsoft’s coders have added over 300,000 new lines of code, 4,200 interoperability fixes and 49 major features.

Edge will be the new default browser on Windows 10 when the new operating system ships this summer. And letting go of aging browser functionality is part of aligning Windows with the modern Web. “Not supporting these legacy technologies in Microsoft Edge has a number of benefits: better interoperability with other modern browsers, improved performance, security & reliability, and reduced code complexity, just to name a few,” wrote Morris and Rossi.

One of the more notable legacy technologies to get the boot is ActiveX, first introduced in 1996. The feature, originally intended to embed Windows functionality into Web pages, has been a source of security headaches for both the company and IE users at large.

Microsoft Edge will adhere to more modern standards of creating feature-rich Websites. “The need for ActiveX controls has been significantly reduced by HTML5-era capabilities, which also produces interoperable code across browsers,” wrote the company’s staffers. “Microsoft Edge will support native PDF rendering and Adobe Flash as built-in features rather than external add-ons.”

Similarly, Browser Helper Object (BHO) support will be supplanted by an HTML/JavaScript-based extension model after Edge’s release. Also following suit is support for the VBScript scripting language. In its place: leading-edge JavaScript compatibility.

“JavaScript has become the de-facto language of the web and is evolving quickly with ECMAScript 6 [ES6] and beyond,” stated Morris and Rossi. “Microsoft Edge delivers the leading implementation of ES6.”

IE8 layout quirks, Vector Markup Language (VML) and DirectX filters and transitions are among some of the other IE-supported features that won’t be making the transition to Edge. “A number of these had been deprecated in the past few releases, but moving to a new engine allows us to remove support completely,” noted Morris and Rossi.

Web developers are encouraged to move on. “To ensure future compatibility with Microsoft Edge and other modern browsers, we recommend against any future development or deployment of these technologies,” they said.

Organizations with legacy Web applications that rely on ActiveX and other obsolete IE features still have somewhere to turn once Windows 10 rolls out, they assured. “These technologies will continue to be supported in Internet Explorer on Windows 10 for users and enterprises who depend on them.”