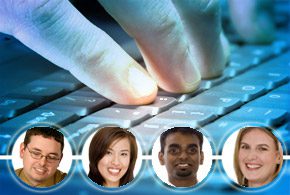 Windows 10 Creators Update includes many new features and enhancements but watchful users may have noticed that one feature was missing when Microsoft began rolling out the operating system upgrade on April 11.

First announced last fall, Windows 10 Creators Update was slated to ship with My People, a feature enables users to pin contacts to the taskbar to encourage quick messaging and drag-and-drop content sharing. Now, members of the Windows Insider early access program can finally try out My People for themselves by downloading Windows 10 Insider Preview Build 16184 for the PC.

My People supports multiple communications apps like Microsoft’s own Skype, which users can select for each contact. For now, users are currently limited to having up to three people pinned to the taskbar.

Build 16184 also includes an update to the built-in Mail and Calendar apps that offers some of the intelligent services offered in the Outlook.com web-based email client to Gmail users.

Recently, Microsoft teased “a new experience for Gmail accounts in the Windows 10 Mail and Calendar apps that brings our latest features such as Focused Inbox and richer experiences for travel reservations and package deliveries that were previously only available to those with an Outlook.com or Office 365 email address,” blogged Dona Sarkar, a software engineer in the Windows and Devices Group at Microsoft and head of the Windows Insider program.

“Windows Insiders will be the first to try out the new experience as the roll-out gradually happens over the next few weeks,” continued Sarker. “You’ll know the new experience is available for your account when you are prompted to update your Gmail account settings.”

A number of bugs have been fixed, including one that caused the Start menu to crash when attempting to drag an app from the All Apps list to the neighboring tile grid. The company also addressed an issue that could cause Night Light to “get stuck in a disabled state,” Sarkar said. Night Light, like the Night Shift feature in Apple iOS, is a viewing mode that cuts down on blue light emissions to help reduce eye strain.

The newest build for Windows 10 Mobile (number 15208) contains a few bug fixes, including one that addresses a flaw in Bluetooth settings that prevented users from accessing certain options. Users who switch networks prior to shutting down their phones should now notice their handsets complete shutdown much faster.

As with any pre-release software, users run the risk of losing data or app instability. This time around, Sarkar cautioned users that some users may experience the loss of data in text message backups. Others may encounter random shutdowns or the immediate crashing of the WeChat app upon launch.