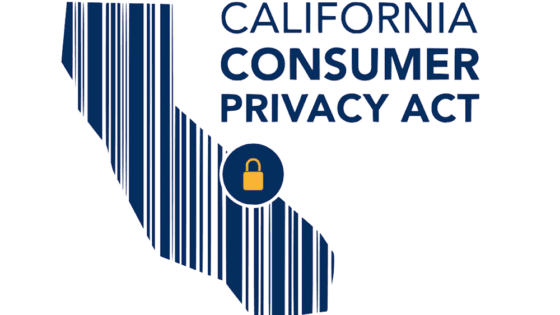 By now you’ve seen a lot of predictions for the wonderful things that will happen in the year 2020. This is partly because we’ve reached the point where technology changes are compounding by building on each other. But it’s also partly because the idea of “2020” grabs the imagination because it sounds cool. The challenge is knowing which prediction is which.

For example, and I know this will be a crushing disappointment, we’re not going to see flying cars in 2020. Like many things that won’t happen in 2020, flying cars depend on more than just the technology. They also depend on government regulators. To get an idea how that affects progress, just look at how long it’s taken to get drone regulations figured out.

In fact, government regulation may be the most important new development to come in 2020–which brings us to the first big thing to look out for …

The California Consumer Privacy Act went into effect on Jan. 1, 2020. It was inspired by Europe’s General Data Protection Regulation, and it governs how entities doing business in California handle consumer privacy. About half of the states in the U.S. are in the process of enacting their own privacy laws, and as you’d expect, there’s little commonality among them. And of course the federal government is considering privacy legislation.

As you would expect in this age of heightened partisanship in Congress, there are two bills–one of which from the Republicans, which is actually more strict than the California law–and which overrides state provisions. The Democrats in Congress have their own bill, which is somewhat different from the Republican bill and which does not override state laws. With the bill the Democrats are proposing, you’d have to comply with the federal bill and with all of the different state laws where you do business.

The long-awaited 5G expansion will finally take hold in 2020, but it may not be the 5G you were expecting. T-Mobile kicked off the expansion in December 2019, and AT&T followed suit by announcing that it will launch widespread 5G early in 2020. But in both cases these are low-band 5G deployments. T-Mobile launched its nationwide 5G in the 600 MHz band, and AT&T is launching in the 850 MHz band.

Both carriers are able to cover large areas with these relatively low frequencies, but those blazing speeds you’ve heard about for 5G won’t be there. That high-speed communications will have to wait for widespread millimeter wave signals, and because of the vast number of cells required, won’t appear for at least five years. Meanwhile, carriers will begin implementing mid-band 5G, but that won’t really be under way in 2020.

You’ve heard a lot about autonomous cars, and you’ll hear more as some moron kills himself or someone else while sleeping in his Tesla as it plows through a construction zone or blows past a school bus. But there’s more to autonomy than self-driving cars. What will matter more to your business are autonomous trucks and delivery vehicles. Autonomous tractor-trailers are already being routinely tested on public highways in Virginia with good success, as are autonomous buses.

It’s in handling routine driving tasks, whether it’s between trucking terminals, on shuttle bus routes or whether it’s handling delivery of materials from the warehouse to production where autonomy shines. Municipalities are already being asked to approve autonomous shuttle busses, and state highway departments are seeing the first requests for commercial autonomous trucks. This is a trend that will accelerate during 2020, because it presents a clear business case and a solution that’s already available.

The differences between the edge and the cloud will begin to fade away. Computing power will be placed where it makes the most sense, and because of improvements in networking, such differences will simply not matter. You will see more of what’s called distributed clouds, where the computing power for public clouds aren’t limited to the cloud provider’s data center. You will also see more emphasis on edge computing with the processing power located near to where the work is being done.

While the main data centers of the cloud providers will still be there, the distributed cloud will be located elsewhere, including at the edge. This will enable edge computing and cloud computing to realize the speed and reduced latency that today’s platforms require, while still supporting the services that are critical to the success of cloud services.

AI as a Service

Artificial intelligence has become a looming possibility to futurists who worry that the machines will take over. However, in real life, AI and machine learning will become critical to the handling of ever-increasing complexity in IT. AI is already starting to become a major factor in dealing with security because it can link widely disparate events to determine trends. But AI can go far beyond that.

IBM, Microsoft and Google are already providing access to AI in their cloud services and are continually adding features and capabilities to make their AI services more useful to their respective customers. As IT becomes more complex, AI will become more important. But for 2020 at least, it will grow mostly in the cloud, because providing the resources to support AI development will be beyond the capabilities of most companies.

Of course, there are a lot of other things that will happen in 2020 that we’re not covering here. There will be new display technologies that will knock your socks off, assuming the human eye can discern them. Passwords will start being phased out as biometrics improve. Encryption might be declared illegal while also being required.