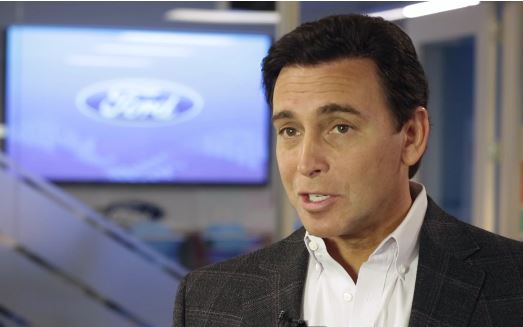 Ford on Jan. 22 joined BMW, Tesla, Mercedes Benz, GM and Volkswagen as vehicle makers who have opened research centers in Silicon Valley, as close as possible to the neighborhoods where some of the world’s best software developers and architects reside.

Ford CEO Mark Fields (pictured) was on hand to help dedicate the new center, which is located in the Palo Alto, Calif., foothills near the headquarters of such important IT product and services providers as Hewlett-Packard, VMware, Tesla and the PARC laboratory.

Fields made it clear that new Research and Innovation Center has been established in Silicon Valley not only to tie the company closer to the idea of new-gen IT but to appeal to innovators in the Bay Area.

“Innovation for us is very meaningful because it’s in our DNA, in the legacy of Henry Ford,” Fields told reporters at the event. “Innovation is why a lot of us joined the company in the first place. We want to be viewed as part of the ecosystem in Silicon Valley. The Research and Innovation Center is another proof point of what we’re doing, and in a year we will be one of the largest, dedicated automotive research teams here in the valley.”

Fields also noted that Ford thinks of itself as “not just as an automotive company, but also as a mobility company.” That statement is true in more ways than one.

The Dearborn, Mich.-based vehicle maker already operates innovation centers at its headquarters and in Aachen, Germany. In those locations, researchers are focusing mostly on materials science, power train improvements, driver-assist advancements and improved safety systems. On a high level, the new Palo Alto center will concentrate on new-gen IT and how it will help drivers be safer and move from Point A to Point B easier and faster. It also will work on autonomous vehicles.

On the scientific level, the Palo Alto lab will connect the dots in areas such as mobility, natural interface development, consumer electronics and big data.

Fields introduced Dragos Maciuca as the new director of the center. Maciuca is a former Apple engineer with decades of experience in semiconductor manufacturing, product development and startup consulting.

Naturally, Ford is now hiring for positions in its new lab. Maciuca hopes to be supervising about 125 researchers, engineers and scientists by the end of the year.

At the outset, the Research and Innovation Center will work closely with Stanford University on projects that include autonomous vehicle software. It also will collaborate with Georgia Tech researchers on long-distance remote-control driving experiments.

Perhaps one of the more interesting projects involves integrating Nest smart home management functionality with Ford SYNC 3 capabilities available to drivers on the road. Theoretically, drivers on their way home from work can use voice IT to direct home heating and cooling, or lawn sprinklers, or use it to simply open the front door if a family members gets locked out.