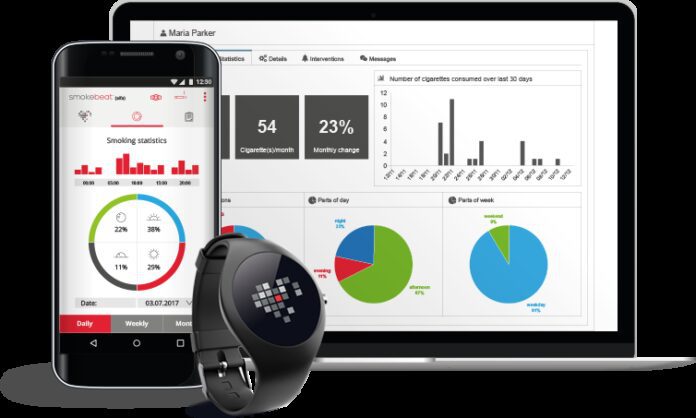 The trend toward value-based care coupled with new devices and algorithms is pushing wearables makers further into the health care market.

At the recent HIMSS health care IT conference, dozens of vendors showed a range of solutions that are designed to do a better job of monitoring patients once they leave the hospital and head into rehabilitation, long-term facilities or home care.

Leading the charge is Somatix, which has just launched SafeBeing, an app for a smartwatch or low-cost band that applies the same machine-learning based, real-time gesture detection technology as its earlier product, SmokeBeat, for smoking cessation monitoring.

“The way value-based care is going, everyone, no matter where you are, is looking for the highest quality care in the lowest cost setting,” Herman said. “At a hospital if a patient bounces back in a readmission within 30 days, there are massive penalties. Elder-care facilities are also increasingly under the microscope for the quality of care that they deliver.”

The Centers for Medicare and Medicaid Services (CMS) reports that nearly 20 percent of fee-for-service Medicare patients return to the hospital within 30 days of being discharged, adding up to 2 million readmissions each year that cost Medicare $26 billion a year.

Somatix’s app can run on smart watches from Apple, Samsung and others. The software uses machine learning algorithms to track specific activity or incidents, such as taking medication or falling. The wearable collects accelerometer, location and other data and from that interprets a unique signal for each type of activity. Administrators at care facilities or even family members can monitor key indicators that may require someone to intervene.

“By monitoring people remotely and passively, we can pick up on risk factors for them getting ill and having to be readmitted—things like low activity, not taking medication, not drinking enough fluid,” he said. “If we can detect them earlier, it may allow us to intervene earlier and therefore may prevent that patient from getting more ill as well as being readmitted.”

Somatix, which announced the Catholic Senior Housing and Health Care Services (CSHHCS) of Bethlehem, Pa., as its first major customer of SafeBeing, is expecting a B round of financing this year as it plans to expand into hospitals, home care and globally beyond the U.S. and Israel.

Samsung had several partners demonstrating apps using the Galaxy Watch for alerts and reminders, including the HealthAssist Watch and MobileHelp Smart.

For its part, AT&T is partnering with vendors such as OneLife Technologies, which is using AT&T’s LTE-M Low-Power Wide-Area network for an untethered solution for monitoring heart rate, location, movement and sleep at the wrist.

AT&T is also partnering on LTE-M with Bodyport, maker of a smart scale that can measure cardiac signals, such as heart rate, and other biomarkers simply by a user standing barefoot on the scale. The makers use machine learning to intuit overall health trends or conditions, including diabetes and kidney function, said Corey Centen, founder and CEO of Bodyport. It can even measure your weight.