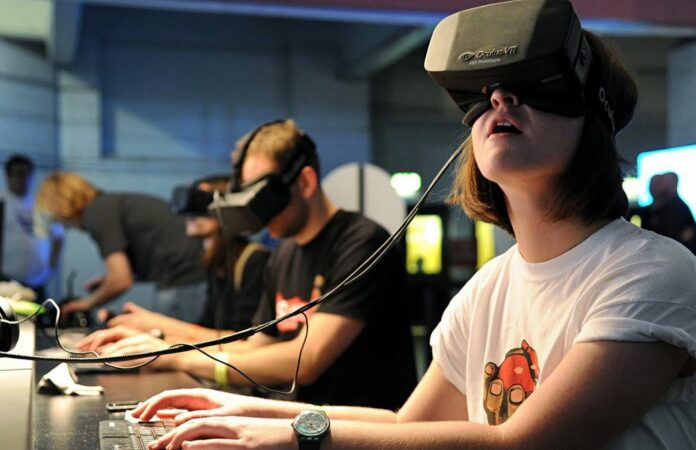 Despite those big, awkward-looking pieces of headgear that users need to experience them, virtual reality and its cousin, augmented reality, are well into the preparation stage for mainstream usage during the next few years.

Where television, movies and personal computers have taken their users in years past, so will these new “realities” — only in a much more dimensioned fashion. The term “immersive experience” is the most relevant here; where television and PCs present content on flat screens, VR places the user smack into the action, so to speak, and into virtual worlds seen by relatively few people up to now. That is, until the second half of the second decade of the 21st century, when the business is expected to become widespread and part of normal routine.

By the way, about those large, unsightly headdresses currently being used for VR: Don’t worry, they’ll be shrinking down over time to eventually become only a little larger than eyeglasses, we’ve been told. Perhaps we’ll even see contact lens-like VR sets someday.

For the record, VR is the computer-generated simulation of a three-dimensional image or environment that can be interacted with in a seemingly real or physical way by a person using special electronic equipment, such as a helmet with a screen inside or gloves fitted with sensors.

AR is the integration of digital images and/or information overlapped with the user’s environment in real time. Unlike virtual reality, which creates a totally artificial environment, augmented reality uses the existing environment and overlays new information on top of it.

As one might imagine, companies in the gaming, retail and entertainment businesses will be the first commercial interests to take advantage of the allure of VR and AR in order to make some money. Off the top, progressive-thinking IT companies such as Facebook (with Oculus Rift VR, which began shipping this month), Samsung (with its Gear VR system) and Nokia (OZO), have taken early leads in this greenfield of new-gen IT.

Where can we expect these technologies to make their biggest impacts first: in entertainment, marketing, advertising or in the enterprise?

“There is no doubt that virtual reality is going to be huge, primarily in helping brands to engage their audiences in new ways,” Jeff Melton, Senior Vice President of Global Technology and Platforms at MSLGROUP, told eWEEK. MSLGROUP is a network of marketing/public relations companies that is part of the French multinational Publicis Groupe.

Strategic Benefits Are Many

“Strategic benefits include deeper emotional connections as well as overall time spent. In a world where brands fight for attention, any method to grab an audience’s attention for more than a few minutes will be of immense value. We feel that entertainment and gaming will be impacted first, as that’s where the majority of the early adopters will be situated.”

However, with the marketing industry is primed to be hugely impacted by VR within the next six months, AR will be coming a little further down the line — likely reaching more maturity in two years’ time, Melton said.

“In short, VR/AR will allow marketers and communicators to tell stories in a new way. With AR/VR, they don’t need to be new stories, but rather the same stories told in a more immersive way that engages the consumer as never before,” Melton said.

“Imagine a home buyer being able to tour 15 houses in a day, rather than go one by one, one weekend at a time. Or a surfer being able to ‘test out’ a new board before making the purchase. Marketing, advertising, and PR will be enabled as never before.”

What other use cases might we see for AR/VR, with the sky seemingly the limit? [Go here to see an eWEEK slideshow by Mike Elgan on 10 top VR use cases.]

Skydive Without Getting into a Plane

“The sky truly is the limit for AR/VR. Imagine a 90 year-old being able to enjoy skydiving without the physical risk, or getting to drive in the Indy 500,” Melton said. “Or a completely revamped shopping experience, where you buys things from home but feel as if you are actually at the store.

“With AR, you will be able to look at a product on the shelf and seeing augmented information about that product such as a rating or review.”

An AR use case that’s already at work in Amazon’s warehouses is a system using SAP’s enterprise resource planning software and Google Glass in which warehouse workers traverse large storage spaces, look at tall racks of pallets containing stored materials, and have the AR headset tell them in real time what’s inside each carton or container. It’s called “error-free identification.”

Saves a lot of time and energy looking everything up on a manifest sheet.

Apartment hunters can use the same technology — although with different software — to look at available rentals from the street and get all the pertinent information flashed before them in the AR headset, such as availability, pricing and others.

A VR-enabled ethnography for improved audience research is also something that could help to build more relevant communications, Melton said.

“Getting more practical, AR/VR will enable a surgeon to perform a life-saving procedure while thousands of miles away,” he said.

“And much of it is already happening. For example, jazz record labels are already offering live concerts in 360. We’re already seeing ‘360’ videos on Facebook and YouTube … the social media experience will explode. AR/VR truly has the potential to change the entire globe.”

As for the enterprise, Eyefluence CEO Jim Marggraff had some insights to share with eWEEK. Milpitas, Calif.-based Eyefluence claims to be the first eye-interaction technology for AR and devices that transforms intent into action through a user’s eyes.

“We see huge potential for AR and VR to impact the nearly 40-million hands-free, desk-less workers in a broad range of enterprise applications,” Marggraff told eWEEK. “AR and VR technologies provide rapid access to information in context and connect people to one another unlike any other technology platform. We see the greatest benefit coming from the ability to be heads-up and hands-free in the field, which will lead to big improvements in productivity, efficiency, and safety.”

Even Oil Rig Workers Will Use AR

For example, in the oil industry, rig workers currently complete security compliance checklists with a large marker and clipboard because they are wearing gloves, Marggraff said.

With next-generation augmented reality, which will be controlled with eye-interaction, those same workers will conduct the checklist with their eyes with time-stamped and identity-stamped data entry, which will improve procedural adherence in this extreme environment—in a fraction of the time.

“Imagine what will happen when you are no longer constrained to the screen real estate of a computer monitor,” Marggraff said. “Virtual reality headsets open up a 360-degree environment to display high volumes of information, applications, and experiences.

“When you add the speed of eye-interaction to AR and VR user interfaces, which we are developing at Eyefluence, you can engage, navigate, and access information at the speed of thought. The adoption of AR and VR by big industries will revolutionize the way we work, communicate, and think.”

The Future of VR and AR

Marggraff and Eyefluence are thinking way ahead of the curve on the deployment and usage of VR and AR, because he believes the user interface hasn’t been perfected yet.

“Today’s tap, swipe, nod, point, and talk methods for controlling first-generation AR and VR devices are limiting their adoption,” Marggraff said. “Once they are enabled with eye-interaction, the ability to transform intent into action through your eyes opens up a world of possibilities in a broad range of applications.

On a construction site, workers will document compliance by taking photographs with their eyes, matching blueprint details, and searching databases—all as fast as they can move their eyes to look and think.

In manufacturing, instant access to instructions, visual dashboards, and eye-messages will enable workers to complete their jobs more effectively and efficiently, saving time and reducing costs.

“Although there will be immediate industry-specific applications, eye-interaction’s deepest impact will be accelerating human-computer interaction, which expands our learning, decision making, and ultimately intelligence,” Marggraff said.

As the ’60s/’70s pop singing group the Carpenters once sang so eloquently, “We’ve Only Just Begun” to touch the influence of both virtual and augmented reality here in 2016.

Oh, and to remind the fashion-conscious: Don’t worry about those big, strange-looking headsets. You won’t even notice the new ones we’ll use in the future.