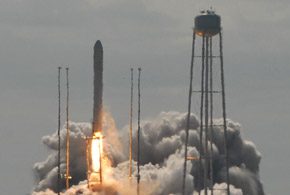 The sound rolled louder than thunder as the Antares rocket rose majestically from Virginia’s Launch Complex 0A on Wallops Island at 10:58 a.m. on the morning of Sept. 18. The Virginia-owned Mid Atlantic Regional Spaceport launch facility was being used by Orbital Sciences to launch an Antares cargo launch vehicle to the International Space Station less than two weeks after the same facility launched a rocket to the moon.

However, the rendezvous between the Cygnus spacecraft and the International Space Station has been postponed to no earlier than Saturday, Sept. 28. A NASA announcement said that a data communications problem created an initial delay of two days, but with the impending arrival of the next Soyuz spacecraft and a crew change the schedule became too tight.

As a result, NASA and Orbital Sciences agreed to wait until the Soyuz operations were completed before scheduling the docking of Cygnus with the space station.

The successful launch from Wallops Island marked almost exactly 50 years from the date of the first launch of a spacecraft into orbit from the facility. It was also the heaviest payload for a resupply mission, according to NASA Associate Administrator Robert Lightfoot, who was present for the launch.

The launch went off, in Lightfoot’s words, “optimally.” While there were some minor glitches, such as a balky video camera and a power cable that needed replacement over the previous weekend, the actual launch was essentially perfect. According to Orbital Sciences Executive Vice President Frank Culbertson, the launch was as close to perfect as it was possible to get. “It did end up a couple of kilometers higher than we’d planned,” he said at the post-launch press conference. “But that’s not a problem,” he said.

Antares is a traditional liquid fueled rocket powered by liquid oxygen and kerosene. It boosts a solid-fuel powered second stage that inserts the Cygnus spacecraft into orbit. The Antares/Cygnus mission is part of NASA’s Commercial Orbital Transportation System (COTS) in which private companies provide launch services to the Space Station. The only other company launching COTS payloads is California-based Space-X, which successfully launched a Dragon spacecraft to the Space Station in 2012.

Prior to the successful launch of these privately developed space vehicles, NASA had to rely entirely on Russian Soyuz spacecraft to resupply the Space Station after NASA retired the last of the venerable Space Shuttles in July 2011.

The Sept. 18 launch is the first in what are currently planned to be 10 launches by Orbital Sciences. The next Space Station resupply launch is planned for December. Wallops Island is expecting to see at least one commercial launch every month for the foreseeable future.

Currently, Orbital is the only company using the Virginia-owned facility. NASA owns its own launch pads that are adjacent to Pad 0A, and maintains a frequent series of its own launches from those.

Launch pads 0A and 0B were built by Virginia and placed into operation in 2006. Virginia Gov. Robert F. McDonnell told eWEEK in an interview that the state sees space transportation as critical to Virginia’s business environment. Because of this the state has established a number of tax incentives for businesses that use the spaceport. McDonnell said that the Wallops Island facility is the responsibility of the Virginia Department of Transportation.

Shortly after launch, the rocket gathered speed, and then blasted its way into the upper atmosphere. The first stage separated about five minutes after launch. It coasted briefly while the first stage fell away, then the second stage fired, launching the Cygnus spacecraft the rest of the way into orbit. The Cygnus spacecraft separated from the launch vehicle 20 minutes after launch, at which point it was already in orbit. Three minutes later the Cygnus deployed its solar arrays and began its independent operations.

The spacecraft carried food, clothing and other supplies to Space Station astronauts. In addition, Cygnus carried seven student experiments, the culmination of the work of nearly 7,000 students in various grades.

Once the spacecraft docks with the Space Station, astronauts will unload the cargo and experiments. Included are some personal items from the astronauts’ families and some mission patches and stickers from Orbital Sciences. “We hope Space-X will bring them back for us,” Culbertson joked.

The launch of Antares and Cygnus was the final step in approving the Orbital spacecraft for commercial use in making supply runs to the Space Station. Once this mission is complete, “There’s nothing else standing in the way,” said Alan Lindenmoyer, NASA’s commercial crew and cargo manager.

After the Space Station astronauts unload the Cygnus spacecraft, they will then begin filling it with trash. Once it’s filled, the spacecraft will be sent back to Earth to burn up over the Indian Ocean. Orbital’s Cygnus is designed to be disposable, unlike the reusable Dragon spacecraft flown by Space-X. During a post-launch press conference, Culbertson noted that the spacecraft developed by the two companies are designed for different purposes, with Cygnus able to handle more cargo, but not being able to land back on Earth.

Editor’s Note: This story was updated with the news that NASA and Orbital Sciences decided to delay the docking of the Cygnus capsule and the space station until Sept. 28 at the earliest.