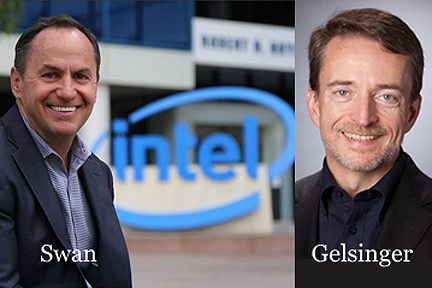 When looking at Intel’s earnings, you’d almost think we weren’t in a pandemic. The company set record revenue, exceeding guidance by a whopping $2.6 billion and returned $19.8 billion to shareholders, who could likely use the financial help. [Editor’s note: See additional analysis at the end of this article from Patrick Moorhead.] But the handoff between Swan and Gelsinger is unlike most of its type, in which the incoming CEO has to save a failing company. That isn’t the case here; Swan has done a phenomenal job returning Intel to a company that is on solid financial ground, allowing Gelsinger to do his magic.

And Pat isn’t standing Pat. He is already recruiting ex-Intel superstars in a very unusual move that should be considered a best practice. I would argue this move supports Gelsinger being named Glassdoor’s CEO of the year.

The goal of a turnaround CEO

Turnaround CEOs are those brought in to fix a company so severely broken that it can’t rely on the succession plan to replace a poorly performing CEO. They tend to come in two classes: those who prep a company for sale, pretty much gutting it to make its financials look better; and those who fix the company’s structure so that it again can be successful long term. I worked for Louis Gerstner at IBM, one of the latter, and watched those in the former group destroy companies. Fortunately, Bob Swan was one of the excellent turnaround CEOs. In record time, he got Intel back into shape so that a more traditional strategic CEO like Gelsinger could take over and assure the firm’s long-term future.

The turnaround process is critical because turnaround CEOs are very different from operational CEOs. Think of this in terms of auto racing, when you have a car that just isn’t working. You could get the best driver on the planet, and you’d still lose. Your first job is to fix the car so it works, then you can get a top driver to win the race. Swan, in this analogy, is the mechanic; Gelsinger is the driver.

Even though he doesn’t start until next month, Gelsinger, who put in 30 years at Intel early in his career, has already started making waves by doing brilliant things.

Anyone that has ever raced professionally knows that to win, you need a champion crew. But one of the problems that Swan’s predecessor Brian Krzanich created was stripping the company of many of its most capable people. Now, typically (particularly at Intel), the new CEO wouldn’t look at former employees as potential resources. Common complaints are they have been away too long, but the real reason is that they may upset others’ advancements because the folks who were let go were more qualified than those who stayed. Equally common is that the employees who were let go represented a threat to some better-positioned senior manager who doesn’t want that threat to come back.

A new CEO needs to build a team loyal to him or her. However, if he builds it with new employees, the people below those employees may not be loyal, and there is an even greater learning curve for the resulting team. But if you bring back people who were poorly treated and take care of them, they’ll be loyal, the people below them will know and trust them, and they can hit the ground running because they know how to work at the firm. One of the significant impediments to a new employee is understanding how things uniquely work in the company, and an ex-employee doesn’t have that learning curve.

Gelsinger has raised some eyebrows by breaking with tradition and going after ex-employees, but I think this should be a sustaining practice. Intel has one of the strongest alumni associations of any firm, and that asset has been underutilized for virtually the entire history of the company. Pat’s moves here suggest that may change, and that change could further ensure Intel’s future.

Unlike what we just saw in Washington, where President Biden was handed a country badly broken by his predecessor, Bob Swan has done Pat Gelsinger a solid favor and given him a version of Intel that was vastly better than he found it. Gelsinger  is already thinking out of the Intel box to ensure a positive outcome for his tenure and showcase that he is indeed the perfect CEO to take Intel into the future.

That is excellent news for Intel’s stockholders, employees and customers, and it showcases how things should be done.

“Even in the midst of Intel’s 7nm manufacturing challenges, the company pulled off a phenomenal Q4, significantly exceeding expectations by $20B in revenue and $1.52 EPS. Tiger Lake demand looks strong on the PC side and I think, based on its 33% growth, likely gained market share. While the data center business did better than expected, it was weighed down by the cloud ingestion cycle, competition and continued decline in enterprise and government purchases. Mobileye was a huge standout, driving 39% quarterly revenue growth and 93% improvement in profitability. Mobileye is on its way to be an over-billion dollar annualized business, a real accomplishment. The company is forecasting a Q1 revenue decline, but keep in mind, that does not include memory business it is spinning off to Hynix. We’ll have to see if the company says anything about 7nm and outside foundry use, but it wasn’t mentioned in the release.”