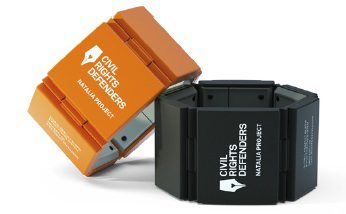 A non-profit organization devoted to human rights, Civil Rights Defenders, announced the initial distribution of a bracelet that alerts social media sites Facebook and Twitter using a mobile signal to notify of an attack or kidnapping, and issues a real-time GPS location of the victim directly to the organization’s headquarters.

The project is named after Natalia Estemirova, a human rights worker in the North Caucasus, who was kidnapped and murdered within 24 hours of being abducted. The technology aims to prevent such an occurrence from happening again by informing social media outlets that could lead to the correct authorities becoming aware of the situation.

Those at high risk of kidnapping wear the Natalia Project personal alarm like a wristband. As an additional precaution, the bracelet may be deliberately triggered or set off by forceful removal. Five bracelets were distributed last week, but the organization said more funding is needed if additional lives are to be saved. Nearby contacts will also be alerted, so that they can provide their resources, and the alarm is also forwarded to their social media followers.

“By signing up with the Natalia Project, users are notified of any alarm from a human rights defender at risk. Users can then choose how they wish to receive it. When a distress signal is sent out, Civil Rights Defenders will validate the signal and keep users updated as the situation unfolds. With the capability to alert the world in an instant, the Natalia Project will apply pressure on the attackers,” a Civil Rights Defenders release noted. “The fact that the whole world will immediately be aware of an attack forms a virtual, defensive perimeter around human rights defenders, who are at risk, as these regimes want to avoid international attention and criticism.”

The first personal alarms were distributed at the Civil Rights Defenders’ conference, Defenders’ Days, in Stockholm on April 2-5. The first stage of the project will include equipping 55 civil rights defenders over the next 18 months, although that is contingent upon receiving enough economic support from sponsors and the general public, the organization noted.

“Most of us, given the chance, would like to help others in danger. These human rights defenders are risking their lives for others to have the right to vote, or to practice religion or free speech,” Robert Hardh, executive director of Civil Rights Defenders, said in a statement. “These are rights that people in some parts of the world take for granted every day. The Natalia Project makes it easy for anyone to contribute to the safety of human rights defenders to allow them to carry on their crucial work, either showing strength in numbers, by ‘liking’ or following on social media, or by donating directly to support the ongoing work.”