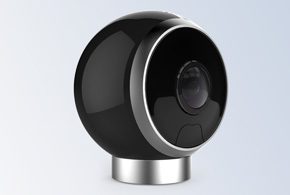 The Allie 360 camera, which was previously available directly from Allie and from Amazon, retails for $499 and provides one-click live streaming, allowing users to place the device in their homes, workplaces or almost anywhere, to see what is happening. It can also be used to stream to social media sites to share adventures with others.

The camera, which debuted in April, enables users to control and capture full 360-degree video and view it on their smartphone or tablet. The camera allows two-way communications and includes a night mode to capture video in low-light conditions.

The Allie 360 uses a 10.5-megapixel image sensor and an f2.8 lens aperture, as well as a Qualcomm Snapdragon 800 processor and resolution of 4320×2432. The camera can be plugged in and operate in an always-on mode or it can be used remotely with a soon-to-be-available $50 accessory battery pack. The camera also includes built-in WiFi 802.11ac/n/b/g connectivity, a built-in microphone and a mounting ring to attach the device to a wall or ceiling.

The device can also be used with compatible VR headsets including Google Cardboard to allow users to capture video and display it as a virtual reality experience. An Allie VR headset can be purchased for $59, while a cardboard viewer is available for $25. The Allie 360 is 3 inches long, 3 inches wide, 3.5 inches tall and weighs 10 ounces. It is built for indoor use only.

The Allie 360 can be used by parents who are away from home and want to check on their children and babysitter, or it can be used to check in on your pets at home. It can also be used by bloggers or others to stream live video from an event or by travelers, business professionals and others.

“We’ve been working to expand the Allie camera’s availability since our launch earlier this year, and now we’re really ramping up so more consumers can experience the benefits of true 360,” Dmitry Kozko, the president of Allie, said in a statement.

The Allie 360 can be used with Android or iOS devices through free apps available through the Apple App Store and on Google Play.

Other VR cameras on the market include the Samsung Gear 360, which was launched in limited quantities for $349.99 at the VidCon conference in Anaheim, Calif., in June. The specialized, high-resolution Gear 360 camera is designed to allow consumers, content creators and others to create 360-degree videos for mobile viewing and for virtual reality content production. The Gear 360 is designed to be used to also create content that can be viewed on the Samsung Gear VR virtual reality headset, which went on sale last fall for $99.99, according to an earlier eWEEK story.

The Gear 360 cameras each have 15-megapixel resolution and record video at 3840 x 1920 resolution at 30 frames-per-second. The device measures 2.2 inches by 2.6 inches by 2.4 inches and runs on the Tizen operating system. It includes a dual-core processor, a microSD slot for expanded storage cards up to 200GB, and a 1,350mAh battery. It also includes WiFi and Bluetooth 4.0 connectivity.

Samsung’s related Gear VR virtual reality headset allows users to view video games, movies and more in immersive new ways. The Samsung Gear VR is a less-expensive, consumer version of virtual reality headsets made by Oculus, which give users the ability to dive deeper into VR games and to have 360-degree video experiences. Users can play immersive VR games or share 360-degree video experiences with friends with the Gear VR as they use head movements to explore, aim and interact in new ways to play and be entertained. A wide variety of content is also available through the Gear VR, turning the device into a home theater.