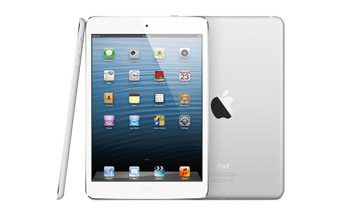 You already know how to use the iPad Mini. After all, using one of these 7.9 inch tablets is just like using the full-sized iPad, it’s just a little smaller. But being smaller doesn’t make the iPad Mini any less capable than its larger brother. In fact, the smaller size may well increase the utility for many people.

The first thing you’ll notice beyond the fact that the Mini is smaller than the regular iPad is that it’s thinner and lighter than any other iPad to date. I looked at an iPad Mini with 16GB and Verizon’s Long Term Evolution (LTE) installed. The Mini is also available with 4G service from AT&T and Sprint, and it’s available in a WiFi-only version. The base price on the WiFi version of the iPad Mini is $329. The base price of the 4G model is $459. You have a choice of two colors, black and white.

The LTE version of the iPad Mini weighs more than the WiFi-only version by a mere 4 grams, or one one-hundredth of a pound. At 0.69 pounds, this really won’t weigh you down. The other noticeable difference is a black plastic antenna cover at the top of the Mini where the cellular and navigation antennas are located.

Much has been written about the fact that the iPad Mini lacks the Retina display of the full-sized iPads, but I didn’t notice that this version uses the same 1024 by 768 resolution of the iPad version 1 and the iPad 2. While this isn’t really a full HD screen when compared with some of the competition, such as the Amazon Kindle Fire HD, it’s not obvious when you’re using the Mini for non-movie tasks. And when you are watching movies, the difference, while visible, isn’t intrusive.

Of course, the reason Apple didn’t create a Retina display for the Mini had a lot to do with cost, but it also affects battery life, and it directly affects the availability of apps that are designed for this screen resolution. I’m sure Apple could have created a Retina display for the Mini, but the cost and the effect on battery life would have defeated much of the purpose of the Mini. Another carry-over from the iPad 2 is the dual-core A5 processor, but it seems entirely up to the task of running the Mini.

What’s probably more important is that the iPad Mini got its camera system from the fourth-generation iPad. This includes a 5-megapixel rear camera with autofocus and stabilization, the ability to record HD video in 1080p, and face-detection capabilities. There’s a 1.2MP camera on the front of the iPad Mini that’s designed for video conferencing and will work with FaceTime or Skype.

Using the iPad Mini is just like using any other iPad. It’s highly intuitive, and because of the ubiquitous nature of iPads in general, everything works as expected. While the icons are smaller and closer together than they are on the full-sized iPad, there’s still a lot of open space on the iPad screen. The screen on the Mini holds the same number of icons as the screen on the full-sized version.

One thing that has changed significantly with the reduced size is typing on the Mini. When you hold the Mini in the portrait position and perform a task that uses the keyboard, the keys are placed just right for thumb typing. In fact, sending emails, creating notes or typing into other apps is markedly easier than with the full-sized iPad. You don’t need to find a flat surface, so you can try touch-typing, and you don’t need to hold the iPad in one hand while you hunt and peck with the other.

Because of its light weight, small size and usefulness for typing, the iPad Mini is ideal for commuters. It fits easily into a briefcase or purse—and perhaps into some jacket pockets—and it has a 10-hour battery life and a variety of e-readers. Using the Mini on a cramped commuter train, subway car or bus would be significantly easier than using a full-size tablet or—worse—a laptop computer.

But of course, the Mini is a handy size for many users whether they ride the rails or not. The smaller size and lower weight make it more portable and easier to have on hand in pretty much any setting. Of course, the same thing applies to any tablet in the 7-inch class, an area that’s turning out to be highly competitive. While the iPad Mini isn’t the ideal solution for watching movies because of its lower resolution and 4:3 aspect ratio, it’s very well designed for everything else.