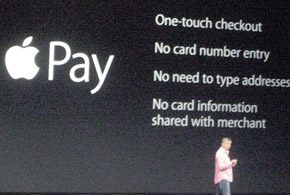 Bank of America ATM machines across the country are getting updates that allow customers to withdraw cash using the Apple Pay app on smartphones. So far, the new Apple Pay cash withdrawal capabilities have arrived at some 2,400 machines from San Francisco to the Raleigh-Durham area in North Carolina.

In May, some 650 ATMs received the updates in San Francisco, about 11 were updated in locations in Raleigh-Durham and another approximately 1,740 Apple Pay-enabled ATMs were also updated across the country, according to a recent story by Triangle Business Journal.

The new ATMs allow bank card users to make withdrawals using the Apple Pay app and their smartphones without having to use a physical bank card at the machine.

Bank of America spokeswoman Betty Riess told the Journal that existing ATM machines are being updated to provide the expanded Apple Pay cash withdrawal services “It’s a matter of a software update,” Reiss said. Newer ATMs include the ability to be used by apps instead of cards. The company plans to expand the services to some 5,000 ATMs across the country by the end of the year in select markets, the story reported.

Samsung launched Samsung Pay in the United States in September 2015. The service is now supported by 300 major and regional banks and credit unions, according to the company.

The mobile payments platform wars have been making plenty of headlines in recent months as more and more companies are adding their own systems to the marketplace.

In December 2015, Walmart was the latest big name to enter the still-developing mobile payments industry, launching its Walmart Pay service, which it expects to roll out across the United States by the middle of 2016, according to an earlier eWEEK story. The new free service works through the company’s existing Walmart mobile app, which is already being used by about 22 million customers each month on Android or iOS smartphones at any checkout lane using almost any payment card. The service launched in December and is being expanded across the nation.

In November 2015, LG Electronics announced the development of its own payment service to take on similar services from competitors, including Apple Pay, Android Pay, Chase Pay and Samsung Pay, according to an earlier eWEEK story.

Earlier in June, IBM announced that it will soon deliver Apple Pay to online business customers that use IBM’s WebSphere Commerce or IBM Commerce on Cloud platforms. IBM’s move bolsters the partnership Apple and IBM entered into in 2014 to deliver iOS applications on IBM’s MobileFirst platform. With the new Apple Pay capabilities, consumers shopping on any of the 12,000 online storefronts powered by WebSphere Commerce clients no longer will have to manually enter their personal details, track down the right credit card and share specific payment information when checking out.