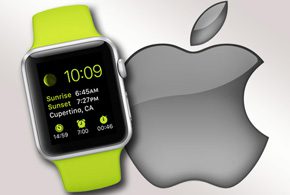 As expected, Apple took the wraps off its upcoming Apple Watch today, showing off the smartwatches that will start at $349 for a Sport version, while also finally releasing pricing details on its luxury Watch Edition, which begin at a cool $10,000 for an Apple Watch in 18-karat gold.

But there was more, of course, including the unveiling of the all-new, re-engineered MacBook, which is thinner, lighter and has longer battery life than previous versions. Apple has priced the latest MacBook starting at $1,299.

Both the Apple Watch and MacBook details came at Apple’s “Spring forward” event on March 9, which was held at San Francisco’s Yerba Buena Center for the Arts Theater and streamed live on Apple TV and online.

Preorders for Apple Watches begin on April 10 in the United States, while the devices will be available starting April 24, when they will be in Apple stores and available for perusing and purchasing.

The long-awaited Apple Watch was originally announced in September 2014 at an Apple new product event, along with the then new iPhone 6 and iPhone 6 Plus smartphones, according to an earlier eWEEK report. Today’s gala provided a stage for Apple CEO Tim Cook and others to show off the device’s features in fine detail, down to its features, colors, pricing and availability dates.

Apple Watch is “the most personal device we have ever created,” said Cook. “It’s not just with you, but it is on you.”

Users will be able to expect 18-hour battery life in normal use, he said, a claim that certainly puts to rest lots of rumors over the last few months that echoed concerns of 5-hour-long battery life with the devices.

The big pricing news, however, surrounds the Apple Watch Edition luxury version, which starts at $10,000 in 18-karat gold, according to Apple. Interestingly, Cook never mentioned what the high-end pricing for an Edition series Apple Watch can reach. The Apple Watch Edition version will be available in limited quantities through select retail stores, Cook said.

The Apple Watch Sport version is available with a Silver or Space Gray aluminum body and with wrist bands in many colors. The regular Apple Watch can be purchased with a fluroelastomer band or one of three different leather bands.

The first Apple Watches will be sold in the U.S., Australia, Canada, China, France, Germany, Hong Kong, Japan and in the United Kingdom, with additional nations to be added in the future.

Cook said the new watches are accurate to within 50 milliseconds of the Coordinated Universal Time (UTC) standard, placing them among the world’s most accurate time pieces.

The Watch can be customized by users with a wide range of watch faces, from formal to modern to digital and even with images of Mickey Mouse.

Users can then add the features they desire on the watch faces, including the date, a stopwatch, upcoming meetings and more. Also part of Apple Watch is a feature called “glances,” which brings information that users want to check often and quickly to them right on the watch face, so they can see what’s needed at just the right time, said Cook. That includes music, heart rate, messages and more.

Apple Watch “allows you to communicate immediately and much more intimately than ever before,” he said, including by receiving messages right on a user’s wrist and allowing them to respond using a tap. Apple Watch also has a built-in speaker and a microphone so users can receive calls on their Watch.

“I have been wanting to do this since I was 5 years old,” said Cook. “And the day is finally here.”

Apple Watch also includes health and fitness features, including the ability to track users’ daily movements, such as how long they are exercising or getting brisk activity, and displaying it in a graphic on the device’s face. At the end of the week, the Watch will send the user a report of his or her activity.

“It’s like having a coach on your wrist,” said Cook.

Apple Watch wasn’t the only big news at the event. The all-new MacBook laptop was also unveiled, with a new super-thin 13.1mm profile and a weight of just 2 pounds. The existing MacBook Air is 17.3mm thick by comparison, an increase of about 24 percent.

The new MacBook includes a host of other changes, including a new butterfly keyboard system that replaces the old scissors keys system, resulting in a smaller, quieter keyboard that is 40 percent thinner than the one it replaces, said Phil Schiller, Apple’s senior vice president of worldwide marketing.

The redesigned MacBook, which starts at $1,299, includes a 12-inch diagonal Retina screen with edge-to-edge cover glass and 2,304-by-1,440 resolution, the thinnest panel ever installed in a MacBook at 0.88mm thin, and display power consumption that is 30 percent less than previous displays, said Schiller.

Also included is a new Force Touch trackpad that includes a “click” that’s managed with software rather than through physical means. The trackpad includes a glass surface with four force sensors and a taptic engine for great user response. The system also reacts to whether a user gives it a light tap or a deep press. If a user presses harder on the fast forward button in Quicktime, for example, the video plays faster on the screen, reacting to the user’s input.

A huge improvement in the new MacBook is that it comes without an internal cooling fan, making it silent.

The MacBook comes with processors ranging from 1.1GHz up to 2.9GHz and in a variety of RAM and storage configurations, as well as with redesigned batteries that are specially designed to fill the existing space in the chassis using terraced batteries that are formed to fit.

The latest MacBook promises up to about 9 hours of battery life for Web browsing and about 10 hours for video playback, according to Apple.