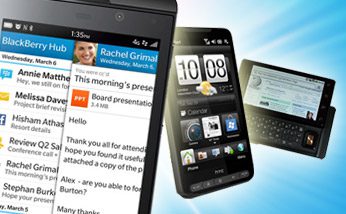 As chip makers Intel and Advanced Micro Devices continue to see their bottom lines impacted by the decline of PC sales worldwide, ARM Holdings is seeing its financial numbers rise, thanks in large part to the growing popularity of such devices as smartphones and tablets.

Officials from both Intel and AMD earlier this month announced first-quarter earnings that saw both revenues and income fall as the company try to expand into new growth areas and reduce their dependence on the PC market. Global PC sales continue to slow as consumers and business users turn their focus and tech dollars to mobile devices.

It’s those devices and others that continue to give a boost to ARM, whose chip designs are found in the bulk of smartphones and tablets on the market today. At the same time, ARM-based chips can be found in such connected devices as smart TVs and sensors. The company—which designs low-power chips and licenses those designs to companies such as Qualcomm, Samsung and Texas Instruments—saw first-quarter profits jump 44 percent, to $136.3 million, and revenues grow 28 percent, to $263.9 million.

Company officials said 2.6 billion ARM-based chips shipped during the quarter, a 35 percent increase over the same period in 2012.

“As consumer electronic and embedded devices are increasingly becoming smarter and more connected, we’re seeing our customers choosing ARM’s technology for high performance and low-power, and their demand is driving both our licensing and our royalty revenues,” Warren East, ARM’s outgoing CEO, said during an April 23 conference call with analysts and journalists to discuss the first-quarter numbers.

In all, ARM announced 22 processors licenses signed during the first quarter for use in such devices as smartphones, digital TVs and wearable technology, and half the licenses were for the company’s Cortex-A Series technology. The company also signed three licenses for its Mali graphics technology. As of the first quarter, ARM has signed a total of 133 Cortex-A licenses, 75 Mali licenses and 17 licenses for its big.Little architecture, which is designed to balance users’ seemingly conflicting demands for greater performance and longer battery life with lower power consumption.

Both Intel and AMD are continuing to drive down the power consumption in their x86-based processors as they look to gain inroads into such areas as tablets and—for Intel—smartphones. They also see embedded devices as a prime growth area. Intel is due to release its next-generation Core chip—dubbed “Haswell”—in June, a 22-nanometer system-on-a-chip (SoC) that will offer greater energy efficiency and graphics capabilities and that will be aimed at notebooks, tablets and hybrid systems. In addition, the company later this year will release its Atom quad-core “Bay Trail” chips for tablets and “Merrifield” for smartphones.

However, for both chip makers, PC chips still account for much of their revenues, something each is trying to correct, and for good reason. Gartner and IDC analysts earlier in April said PC sales globally continue to slow, an indication of a shift in the overall computing market.

“Consumers are migrating content consumption from PCs to other connected devices, such as tablets and smartphones,” Mikako Kitagawa, principal analyst at Gartner, said in an April 10 statement. “Even emerging markets, where PC penetration is low, are not expected to be a strong growth area for PC vendors.”

ARM Gets Boost From Smartphones While PCs Hurt Intel, AMD

ARM officials said they are well-positioned to deal with the slumping PC market, noting, for example, that shipments of ARM-based storage chips—for flash and solid-state drives—more than made up for the decline the company saw in PC hard disk drive controllers. At the same time, the company is not putting its entire future in the mobile phone space. Pointing to the microcontroller space, ARM officials noted that while that part of the industry grew at 20 percent in the quarter, ARM’s revenues there were up 40 percent. East said that “five of the 10 billion or more chips we are going to ship this year will be unrelated to mobile phones.”

ARM also continues to position itself to expand deeper into the data center in areas such as low-power servers and networking gear. Already some ARM partners, such as Calxeda and Marvell Technologies, are leveraging ARM’s 32-bit designs to build servers. However, the real push will be when systems using ARM’s upcoming ARMv8 architecture—which includes such key server capabilities as 64-bit support and greater memory—start hitting the market next year. East said the company already is seeing partners licensing the ARMv8 architecture for use in mobile devices and computers.

At the same time, he noted that Marvell already is deploying some ARM-based servers with Baidu, China’s largest search engine company. In addition, top-tier server vendors like Hewlett-Packard and Dell are looking to use ARM chips in some low-power servers aimed at cloud computing and Web 2.0 environments, while AMD has said it will make ARM-based server chips to complement its own x86 Opteron processors.

Intel is developing a family of Atom processors aimed at the microserver space. While HP officials made headlines in November 2011 when it announced its low-power Project Moonshot systems will include ARM-based chips, the company’s first option was Intel’s Atom “Centerton” chips. Intel also is readying the next-generation “Avoton” processors, which will be available later this year.

HP officials said earlier this month that they also will leverage ARM-based chips from Calxeda, Marvell and Texas Instruments in Moonshot servers, as well as Xeon chips from Intel and processors from AMD.