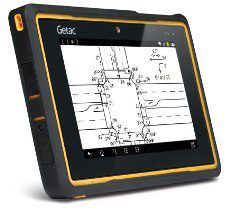 Getac has announced that the Z710 Android-powered rugged tablet received ATEX (Explosive Atmosphere) certification to operate in explosive environments. The manufacturer of rugged computers claims the Z710 is the industry’s first rugged Android tablet to offer the optional ATEX Zone II/22 certification for use in hazardous and explosive environments.

Applications include petrochemical, pharmaceutical, and oil and gas industries, where ATEX compliance is often mandatory for inspection and maintenance work as well as emergency notification, said the company.

“Workers operating in environments with potentially explosive atmospheres need to be able to depend on their technology,” Jim Rimay, president of Getac, of Irvine, Calif., said in a statement. “The Android platform provides users a cost-effective, open source alternative, and the optional ATEX certification feature makes the Z710 the only Android-based tablet solution for field deployment in these hazardous environments.”

The Z710 tablet also meets MIL-STD-810G and IP65 ratings. The high-security features, including random memory processing (ASLR), are said to make the operating system “all but impenetrable to memory corruption.”

With a starting price of $2,299 with the ATEX option, the Z710, which boasts a 7-inch display, is available for ordering, with first orders shipping in July.

According to a recent report on the rugged mobile computing market, VDC Research finds the rugged mobile market is in a state of transition. “While the need for rugged devices to support many business and mission critical processes remains strong, we feel there is a clear need for rugged vendors to reinstate their value proposition in the context of increased pressure from consumer devices with more modern OS platforms and addressing the perceived innovation gap,” David Krebs, vice president of Enterprise Mobility at VDC, of Natick, Mass., said in a statement.

Like Getac, which recently upgraded the Z710 to Android 4.1 operating system, other tablet manufacturers are listening to their customers’ demand for modern OS platforms. As an example, in May 2013, Xplore Technologies launched Windows 8 on its iX104C5 rugged tablets, giving users the option to run Windows 8 or Windows 7. The company recently unveiled its fifth generation of rugged tablets, which are designed to withstand the shocks and vibrations in military vehicles, ambulances and police cars.

While the iX104C5 product line comes standard with Windows 7, it can now be upgraded to Windows 8 to meet the requirements of mobile workers in demanding environments, such as oil and gas, military, government, utilities, manufacturing, distribution and health care industries. It also makes it an attractive option to enterprises and small and midsize businesses (SMBs) that want to run Windows 8 in their daily operations, allowing them to use the modern OS in extreme environments, said the company.