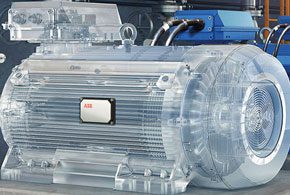 Like a wearable on a user’s wrist that can monitor heart rate and calories burned, electric motor company ABB has developed a Bluetooth-linked sensor that can be mounted on any of its electric motors to tell users how the machines are working and if problems are cropping up.

The ABB smart sensor system aims to help a wide swath of industries, including manufacturing plants, water and electric facilities, steel mills, plastics plants and more, to improve the uptime on their operations by learning about equipment problems and fixing them before disruptive repairs are needed.

ABB’s electric motors range in size broadly, producing from a fraction of one horsepower to thousands of horsepower, Michael Offik, an engineer and the director of packaged solutions for ABB, told eWEEK.

“Typically with these motors, companies wait until they break and then they fix them,” said Offik. But with that approach, companies can’t plan their downtime, and small problems can often lead to bigger repairs, he said.

That’s where the idea of merging today’s modern micro-sensors with Bluetooth capabilities in smartphones essentially created the concept of “wearables” for electric motors (pictured with red ABB logo) that can communicate internal data from the devices just like a wrist-worn fitness band gives wearers insights into their own health, said Offik.

The accompanying software “sees” the sensors on the motors and allows them to be registered and identified, then sends out user alerts and status reports based on a range of operational criteria. Yellow alerts, for example, can signify potential problems with overloads or high temperatures.

ABB has been working on the technology for a while and has a number of beta users that have been trying the sensors and reporting systems. The sensors, which are about the size of a smartphone, mount right on the outside of an electric motor and can measure operating temperatures, vibration and other factors to give users insights into the health of the motors, he said. ABB motors typically run pumps, large fans, compressors and other equipment.

“We are able to take advantage of all the things that are going on in the motors using micro-sensors and Bluetooth technology,” said Offik. The sensors sample the condition of the motors every hour, then send it for storage and analysis to a portal, where users can evaluate the results on a computer screen or through a smartphone.

Because the data is collected by a remote sensor and is transmitted via Bluetooth, workers don’t have to put themselves in danger attaching occasional probes to the running electrical motors, said Offik.

Instead, the collected information can be analyzed using ABB’s deep experience in motors to show users the basic health of the devices and their operating parameters, he said. The portal lets users review all of the sensor-equipped motors in their operations to monitor their performance and view trends.

“We expect that this can help provide a 70 percent reduction in downtime,” said Offik. “In the end, it’s good for the users.”

And while the upcoming ABB smart sensor system is aimed right now at the company’s own electric motors, the concept could potentially be expanded to other markets, including automotive electronics such as alternators and electric car motors, and other uses.

“There’s nothing that says you can’t apply the same technology to other things,” he said.

The ABB sensor system is expected to be available later this year to all customers, said Offik. The batteries in the sensors are expected to last between three to five years. The system will work with Android or iOS smartphones. Pricing for the system has not yet been announced.