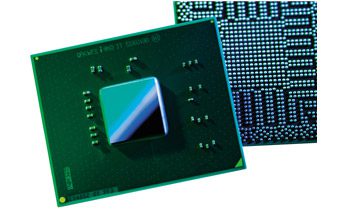 The heightened competition in the mobile chip space quickly took center stage at the 2013 Consumer Electronics Show, with Intel and Advanced Micro Devices laying out plans to become more significant players in the market and Qualcomm and Nvidia introducing their latest processors for smartphones and tablets.

Intel and AMD, stalwarts in the PC and server chip spaces, are looking to make inroads into a mobile chip market that is dominated by designer ARM Holdings and its manufacturing partners, including Qualcomm, Nvidia and Samsung Electronics. Intel officials are looking to drive down the power consumption of its Core and low-power Atom platforms to make them more competitive in devices like smartphones, tablets and Ultrabooks—extremely thin and light notebooks that offer solid performance and long battery life.

Intel and AMD made strong plays with their x86-based processors, but Qualcomm and Nvidia also unveiled new offerings.

At a press conference at CES Jan. 7, Intel officials introduced new Atom and Core chips that are more energy-efficient than their predecessors, offered some road map details on future chips and talked about such initiatives as its Perceptual Computing efforts, which they said will bring systems the ability to more readily recognize faces and understand human gestures.

“The best of Intel is coming to a mobile device near you,” Kirk Skaugen, vice president and general manager of Intel’s PC Client Group, said in the announcement of the vendor’s CES news. “We are set to deliver the biggest increase in battery efficiency in Intel’s history with 4th generation Intel Core processors, while adding broad new human interfaces to computing devices through touch, voice, facial recognition and gesture-based interactions. We’re also significantly extending the performance and power savings in Atom processors as we accelerate our mobile offerings in an unprecedented fashion in 2013.”

Intel unveiled new Atom chips aimed at smartphones sold in emerging markets, a part of the market that could see 500 million units sold in 2015, according to Intel officials. The new Atom line, formerly code-named Lexington, includes the Atom Z2420 chip with features such as Hyper-Threading, and can hit speeds of 1.2GHz.

At the same time, Intel rolled out a smartphone reference design for the value smartphone market, and officials said such device makers as Acer, Lava International and Safaricom will put the chips into their own smartphones.

“The addition of the low-power Atom platform enables Intel to address new market segments and further rounds out our expanding portfolio of smartphone offerings,” Mike Bell, vice president and general manager of Intel’s Mobile and Communications Group, said in a statement.

Bell also unveiled the upcoming Atom Z2580, which he said will offer up to two times the performance of the current Z2460 chips.

The Intel officials were backed on stage by a host of devices, including tablets and Ultrabooks running Microsoft’s Windows 8 operating system, and Bell said the company already is booting the upcoming quad-core Atom “Bay Trail” system-on-a-chip (SoC), which will launch in time for the holiday season at the end of this year. It will offer twice the performance of Intel’s current tablet chips and improved security features, and enable devices as thin as 8mm and offering all-day battery life, according to Intel officials. Intel at CES reportedly is demonstrating Bay Trail-based devices running both Windows 8 and Google’s Android OS.

In its Core chips, Intel is driving down the power consumption of its current 3rd generation Core chips to as low as 7 watts in some models, enabling even thinner and lighter system Ultrabook designs. Lenovo, with its IdeaPad Yoga 11S, and Acer, with a detachable system, will be among the first OEMs to release Ultrabooks based on these chips this spring. At the same time, Skaugen talked about the upcoming 4th generation Core chips—dubbed “Haswell”—which will offer up to nine hours of continuous battery life.

Intel officials showed off a reference design for a detachable Ultrabook—called “North Cape”—which can convert to a tablet, bumping up the battery life as to as long as 13 hours. They also stressed that Haswell-based Ultrabooks will need to be touch-capable.

During the press conference, Skaugen also said that Haswell will help drive down the cost of some Ultrabooks to as low as $599. Pricing has been a key issue around Ultrabooks, which Intel officials first broached in 2011. Ultrabooks now start at about $899, which analysts have said is too high to compete with tablets and other systems. Bringing that price down is a key part in pushing adoption of the form factor.

For their part, AMD officials at CES Jan. 7 gave journalists a look at upcoming accelerated processing units (APUs) aimed at tablets and ultrathin notebooks. Included were demonstrations of the vendor’s first true SoC chips, “Temash” and “Kabini,” both of which will be the industry’s first quad-core x86 SoCs when they ship in the first half of the year, according to AMD officials.

They also unveiled Richland, which is shipping now to OEMs and offers a 20 to 40 percent increase in visual performance over current AMD A-Series chips. Officials said Richland will include gesture- and facial-recognition software. The follow-on to Richland—”Kaveri”—will begin shipping to systems makers in the second half of the year.

“With a groundbreaking, new APU line-up in 2013, AMD is poised to win in high-growth consumer segments,” Lisa Su, senior vice president and general manager of AMD’s Global Business Units, said in a statement.

AMD executives are looking at ultraportable devices—such as ultrathin notebooks and tablets—as one of several growth areas as the company tries to improve its financial footing. AMD has been impacted by the slowdown in sales of PCs worldwide, and is trying to reduce its reliance on the systems. After a difficult third quarter, the company announced it was cutting 1,770 jobs and focusing on the growth areas, which also included embedded systems and dense servers.

Also at CES, Qualcomm officials announced that the company has begun sampling the next generation of its mobile ARM-based SoCs, the Snapdragon 600 and 800 processors, which they said offer a strong combination of high performance and power efficiency. The quad-core Snapdragon 800 chips are aimed at high-end mobile and computing devices, offering up to 75 percent better performance than the current Snapdragon S4 Pro chip and lower power, thanks in large part to its 28nm designs. The chips can hit speeds of up to 2.3GHz per core.

Other capabilities include an integrated third-generation 4G LTE modem and integrated 802.11ac WiFi connectivity, a new Adreno 330 GPU that offers more than twice the performance for compute applications over the current Adreno 320, and an asynchronous SMP architecture that brings dynamic power sensing and control for peak performance per core and extended battery life.

“Inside these tiny processors are all of the leading technologies that you have come to expect from Qualcomm,” Raj Talluri, senior vice president of product management for Qualcomm’s Code Division Multiple Access (CDMA) technologies, said in a blog post, adding that the chips will be found not only in smartphones and tablets, but also in such devices as smart TVs and digital media adapters. “And we continue to custom build these technologies in-house so they can be fully tailored and tightly integrated with the entire system. This level of customization enables the Snapdragon experience—stunning performance and extreme battery life.”

The Snapdragon 800 chips are now sampling and will be in devices by the middle of the year. Meanwhile, the 600 chips are aimed at high-end mobile devices and will offer 40 percent better performance than the Snapdragon S4 Pro at low power, according to officials.

The chips feature a new Krait 300 quad-core CPU with speeds up to 1.9GHz and the Adreno 320 GPU. The 600 processors also are sampling and should be in devices in the second quarter, the company said.

The chip is based on ARM’s Cortex A-15 design, which offers 2.6 times faster Web browsing and improved app performance.

Also at CES, Broadcom announced it will license ARMv7 and ARMv8 architectures for future chips that will make their way into such devices as set-top boxes and broadband offerings.

“Access to the ARMv7 and ARMv8 architecture will enable Broadcom to bring innovation through highly optimized 32- and 64-bit SoC implementations to deliver high-performance, low-power solutions across a broad range of market applications, including broadband access and set-top box,” Daniel Marotta, executive vice president and general manager of Broadband’s Communications Group, said in a statement.