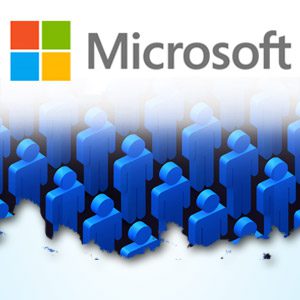 A sure signal of the reasoning behind Microsoft’s decision to lay off some 18,000 employees is to take a look at what’s being dumped. The quick look will tell you that it’s the low end of the business—cheap mobile phones, mostly.

The biggest share of the cutbacks came from Microsoft’s devices business, much of which came from the Nokia handset division acquisition. First to go was software development for feature phones, followed closely by the nascent Android business. Also going away are things that aren’t core to what Microsoft does, such as their production studio for television shows intended to run on the Xbox.

Of course, as is usually the case, Microsoft is getting rid of large portions of its long-suffering marketing team as well as a lot of middle managers. But two thirds of the layoffs involve Nokia unit employees, which makes one wonder who will be left to design and build phones. What’s interesting is that Microsoft did not touch devices such as the Surface tablet, which is a prime focus for the company’s enterprise plans.

So what does this all mean? Probably a lot less than some think. Feature phones, after all, do nothing for Microsoft’s plans to return to robust growth. They don’t help sell Microsoft products or services; they don’t run Microsoft apps, and you can’t use them to access OneDrive. What feature phones do is provide access to information in developing markets, especially markets where most people can’t afford full-scale smartphones.

Likewise, killing off the new Android phones that Nokia was starting to offer gets rid of low-end smartphones that may have Microsoft apps and services such as OneDrive or Office 365, but which weren’t based on Windows. Notably, these phones were also primarily sold in developing markets.

But this doesn’t mean that Microsoft is necessarily deciding to ignore developing markets. What it means is that Microsoft is going to switch from the low-cost Nokia X devices to Lumia phones running Windows. To do this, Microsoft will, by necessity, have to reduce the cost of Windows Phones so that people in those markets can afford it.

Those frequently mentioned high licensing prices for Windows Phones don’t need to be that high, after all. And even if they are, remember, this is Microsoft selling licenses to itself now that it owns Nokia, and that means that the licensing costs are simply passed around and accounted for within the company. Microsoft can, if it wishes, give those Lumia phones away and pay for any costs through internal transfers and accounting adjustments.

While high-end Nokia phones still cost a lot to make, that doesn’t have to be the case for phones aimed at developing economies. The same basic phones that are being used for cheap Android devices can run Windows instead, and sell for the same prices. What really happens here is that Microsoft simply has one platform to worry about instead of two. This, in turn, increases efficiency and decreases costs.

The layoff of so many Nokia employees was expected. When Microsoft or any other company acquires another, you can assume that duplicate positions will be eliminated. In addition, if the acquisition results in a revised mission, any employees supporting the old mission (feature phones, for example) will be dismissed.

Microsoft is eliminating a number of staff positions beyond Nokia. Many of those positions are layers of management that simply don’t need to exist.

Microsoft’s staffing under the old order was focused around small teams made ineffective by a combination of stack-ranking and a lack of authority on the part of managers to do much of anything.

The result is that few decisions were made, the best employees were frequently fired or departed in frustration, and communications internally were nearly nonexistent. Apparently, Satya Nadella figured this out after taking over as CEO and decided to do something about it.

Assuming that Nadella achieves his intended organizational goals, Microsoft will become more efficient and agile, which is a good thing. But even if many of the people laid off are the wrong ones, those people may follow a pattern predicted by the Bellevue Reporter, and will result in a new wave of very smart entrepreneurs suddenly flush with severance money that they’ll use to create startups.

But despite all of the predictions of doom, these layoffs are most likely good for Microsoft. They’ll allow the company to focus on the mobility solutions it thinks will provide the best return, while not being saddled by those that don’t contribute to the company’s long-term market strategy.

But nothing in Microsoft’s actions points to major changes such as selling off the phone business. While it’s likely Microsoft may outsource some of the manufacturing to China, especially the low-end devices, the only way for Microsoft to make sure that Windows Phone devices get made is to make them itself.

Remember, Microsoft’s long-term goal is a unified Windows on all devices from desktops to wearables. For this to happen, handsets running Windows Phone are a necessary component of the strategy. Closing that part of the business down when phones are so important to enterprise users simply doesn’t make sense.