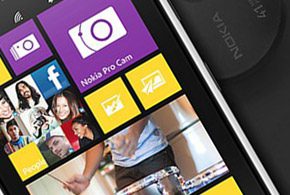 Billed as an “affordable flagship” by the company, the Lumia 830 will go on sale later this month for 330 euros, or rough $427 U.S., at current exchange rates, before taxes and subsidies. By comparison, an unlocked, contract-free 16GB Apple iPhone 5S retails for $649 in the days before its successor is set to debut.

It wouldn’t be a Lumia without devoting extra attention to the smartphone’s camera. “Our affordable flagship, the Lumia 830, comes with a rear-facing 10MP PureView camera with Zeiss optics and the thinnest and lightest Optical Image Stabilization system we’ve ever built; letting you capture razor-sharp images day or night,” Microsoft spokesperson Nishtha Arora said in a statement. The front-facing camera can capture 1-megapixel (MP) stills and 720P video.

The smartphone runs Windows Phone 8.1 Update 1 and is powered by a 1.2GHz quad-core Qualcomm Snapdragon 400 processor. The 830 will ship with the Lumia-exclusive Denim Update, which includes the Lumia Camera app (replacing Nokia Camera), “4K-quality” video recording at 24 frames per second (FPS) and a voice-activated version of Cortana that activates when a user utters “Hey Cortana” instead of pressing the microphone button.

The device is fronted by a 5-inch In-Plane Switching (IPS) LCD display with a resolution of 1280 pixels by 720 pixels. Curved Gorilla 3.0 glass helps mitigate cracks and scratches while the company’s Super Sensitive Touch tech allows for touch input with gloves.

A metal and polycarbonate shell bears similarities to the Lumia 930, which launched in April. Available in four colors (white, black, orange and green), at 0.33 inches thick (8.5mm), the 830 is the “thinnest and lightest Lumia to date,” added Arora.

Storage options boil down to an included 16GB of capacity and an expansion slot that can accommodate up to a 128GB micro Secure Digital (SD) card. A 2,200mAh removable battery offers a maximum standby time of 22 days and features integrated support for Qi wireless chargers.