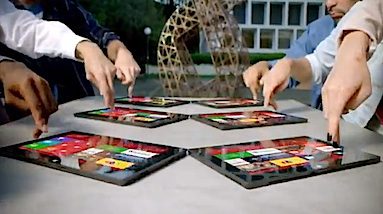 Microsoft CEO Steve Ballmer promised to leave nothing Apple offers unrivaled, and it increasingly seems that he means it. Last month, Microsoft introduced Surface, its answer to the iPad, and now it’s said to be working on a gaming-centric tablet nearer to iPad Mini proportions.

According to a Nov. 6 report from The Verge, several folks in Redmond, Wash., home to Microsoft’s headquarters, have confirmed that “initial hardware planning for an Xbox Surface is under way.”

Sources tell The Verge that specifications that leaked back in June are legit—that the tablet will feature a 7-inch multi-touch LED display with a maximum resolution of 1280 by 720, have a graphics processing unit from Advanced Micro Devices, WiFi and Bluetooth capabilities, four USB 3.0 ports, one headphone port per wireless game controller and support for up to four wireless game controllers.

The report added that a custom ARM processor is likely, as is high-bandwidth RAM designed specifically for gaming, but that the Xbox Surface won’t run a full version of Windows but may well support expected tablet functions like messaging.

“The software giant recently locked down several Xbox-related buildings [in Silicon Valley], limiting employee access to the company’s Interactive Entertainment Business division,” wrote The Verge. “The lockdown is likely related to Microsoft’s increased testing of the tablet, providing a way for other parts of the Xbox team to build games and software for the device.”

When Microsoft introduced the Surface in June, it pointed to the Xbox to downplay its transition from software maker “into a devices and services provider,” as Andrew Rassweiler, senior principal analyst at IHS iSuppli, put it in a Nov. 6 report of the Surface’s bill of materials. Key to such a transformation, said Rassweiler, is offering hardware that generates high profits, “similar to what Apple has achieved with its iPad line.”

With the Surface, Microsoft brings in more profit per unit than Apple does with the iPad, IHS found.

Microsoft “will need to get into the hardware business if it really wants to generate serious cash,” Mawston told eWEEK. By 2013, or 2014 at the latest, the firm expects Microsoft will also launch its own smartphone.

Xbox currently controls a 49 percent share of the gaming console market, Microsoft officials said during an Oct. 18 conference call on the financial results of its fiscal 2013 first quarter.

“Whether we build our own devices … or work with our partners to develop stunning new Windows devices, we will continue to offer consumers and businesses wide-ranging choices, so that every user can get exactly what they want at the price that is right for them,” Microsoft CFO Peter Klein said during the call.

On Oct. 17, Microsoft also introduced Xbox Music, a service that Klein described as enabling users to “access their content seamlessly from any device, at any time.” Not unlike Apple’s iCloud.

Ballmer, in a now well-quoted July interview with CRN following Microsoft’s Worldwide Partner Conference, told the tech site, “We are not going to let annyyyyyyyy piece of this [go uncontested to Apple]. Not the consumer cloud. Not hardware/software innovation. We are not leaving any of that to Apple by itself. Not going to happen! Not on our watch!”

Apple is rumored to be preparing a television for an early 2013 release. Should we soon enough expect the same from Microsoft?