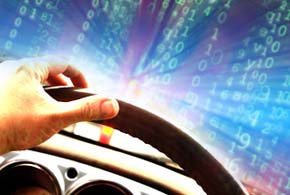 PALO ALTO, Calif.—The hottest trend in automobiles is the self-driving car. But there are a lot of other developments worth noting. Companies such as Nuance Communications, for example, are using artificial intelligence (AI) and voice recognition to make rides safer and more enjoyable for both the driver and passengers.

In a demonstration for eWEEK Nuance executives showed off a Chrysler Pacifica minivan customized by Nuance to include four built-in microphones (two in front, two in back) and the company’s AI-powered Automotive Assistant software called Dragon Drive that displayed information on the vehicles in-dash display.

Some of the features Nuance demonstrated are yet to be released, but many functions of Dragon Drive have already been incorporated in certain BMW vehicles letting front seat passengers interact with the BMW in-car infotainment system. Microphones installed in the Chrysler Pacifica allowed both front and back seat passengers to communicate with the system.

For drivers, the system allows easy, voice-control access to maps and directions, but it also offers more personalized information via the system’s AI-driven Contextual Reasoning Framework. During the demonstration, the driver asked for directions to find parking near an address in San Francisco. The system listed several choices on the display, but the driver can pare that down by stating preferences like “no valet” and “cheapest”.

“Over time the system learns your preferences and those appear first,” said Lior Ben Gigi, Senior Product Manager at Nuance. The system can also be proactive, alerting the driver when it’s time to get gas and recommending where to get it, selecting the cheapest option or perhaps one that honors a loyalty card if that has been a preferred choice.

Dragon Drive can recognize the voice of other individuals in the car based on where they are seated. A passenger in the back seat for example can say “I’m cold” and Dragon Drive will activate the seat warmer if that’s available.

“Dragon Drive is always listening,” explained Eric Montague, Senior Director for Product Marketing and Strategy at Nuance. But to get the system’s attention, individuals need to preface their request with “Hello Dragon.”

Near the end of the demonstration, Nuance showed a feature still in development called “Just Talk” where the system was able to discern a request without specifically being addressed. For example, the driver might say in conversation with a passenger “We’re going to need directions” and Dragon Drive will ‘speak up’ to offer directions.

Already the system uses “interference cancellation” to recognize individual speakers so the driver, for example, can converse with Dragon Drive uninterrupted even if other passengers are talking.

Other features for passengers are mainly in the area of infotainment, but Montague said Dragon Drive could potentially help facilitate conference calls and other communication of interest to business travelers.

In the demonstration, eWEEK joined three passengers in the car in a game of “Dragon Tunes” where you try to name popular songs based on brief music clips. Any passenger could say “Got it” and the system correctly recognized whether or not you had the right answer. Because features like Dragon Tunes are embedded in the system, they won’t be interrupted by inconsistent cellular reception.

Montague said Nuance has been working with car makers for 15 years with various voice recognition products and expects to eventually get Dragon Drive pre-installed in a range of new vehicles. Companies such as Google (Android Auto) and Apple (CarPlay) also have deals with car makers to get their software pre-installed, offering navigation, music and other infotainment features. He said Nuance is open to working with other providers to make sure their systems can interoperate where it’s appropriate.

“I think there’s an opportunity where eventually we’ll be in a world where virtual assistants work with each other,” he said.