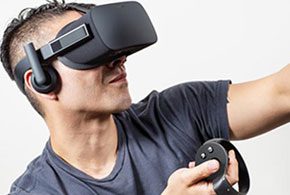 Oculus began shipping its long-awaited $599 Oculus Rift virtual reality headsets to early buyers on March 28 but a decision by the company to sell some Rift devices in Best Buy stores starting May 7 is making preorder buyers who are still waiting for their devices very angry.

“Today we’re excited to share more details about our retail plans for Rift (pictured), which launches at 48 Best Buy stores on May 7 as part of The Intel Experience,” the company wrote in a May 2 post on the Oculus Blog. “Later this summer, we’ll start offering even more in-store Rift demos at additional Best Buy locations.”

By releasing some devices through Best Buy stores, the company said it will be giving potential users “a first chance to jump into truly immersive VR,” the post states. “We’ll have a variety of experiences that everyone can enjoy, including VR vignettes with Oculus Dreamdeck. Ultimate thrill seekers will be able to experience what it’s like rock climbing on the side of a cliff with The Climb, and in the coming weeks, you’ll be able to explore the beautiful alien world of Farlands.”

Well, that certainly sounds dreamy, at least until you read the annoyed, angry and bitter comments that have been left so far by some 18 preorder buyers starting just after the post was made.

“This just re affirms that maybe the only thing I truly preordered was hope,” wrote buyer Greg Dietz in the comments section. “Turns out that’s on backorder now too, considering some [person] might randomly walk into Best Buy and pick up a Rift months after I preordered it AND months before mine even ships. This is insanity. I feel more disappointed as time goes by.”

Another preorder buyer, Luke Goddard, wrote: “I must admit this is a bit of a let down from Oculus, it just seems [to be] knock-back after knock-back. First preorders were pushed back a bit due to too many orders and lack of parts, which is fine, but then to find out they will be selling it in shops before preorders are fulfilled—great. Not only that—people like me are still awaiting a confirmation of when our Oculus Rifts will even be dispatched. It’s getting a bit absurd now.”

Another commenter, Peter Peterko, wrote: “What a joke … it looks like the preorders which should be the first people to get Rifts will actually be the very last ones. I canceled mine anyway … got [an HTC] Vive 3 weeks ago.”

Oculus did not immediately respond to an eWEEK inquiry seeking further comment about its Rift retail sales plans. In its blog post, however, Oculus gave more details about the retail store sales it is planning to start, even while preorders continue to be filled.

“A small number of Rifts will be available for purchase at select Best Buy stores starting May 7 and online from Microsoft and Amazon, starting May 6 at [12 noon EDT],” the company wrote in its blog post, explaining its move. “Quantities will be extremely limited while we catch up on Rift preorders.”

Oculus knows “that many pre-order customers are still waiting for their Rifts, so we’re offering those customers a chance to purchase Rift from retail instead—while keeping their preorder benefits, like the EVE: Valkyrie Founder’s Pack and priority status for Touch preorders,” the post continued. “Starting May 6th, if you’re interested, simply go to your order status and let us know you’ve purchased a Rift at retail, and we’ll cancel your preorder. Your EVE: Valkyrie entitlement will appear in your order history.”

The Rift virtual reality headsets began shipping on March 28 as the company began filling Kickstarter orders for its latest flagship VR devices, according to an earlier eWEEK story. Customers were told at that time that they will receive an email when their orders are being prepped one to three weeks prior to shipping and then another email when their payment method is being charged and the device is being shipped. Rift buyers who didn’t participate in the company’s Kickstarter campaign last year or didn’t preorder their devices through the preorder process that began in January can now order them through Oculus.com, but the site is listing expected shipping dates in July. Buyers can also buy their Rift VR viewer in a bundle with an Oculus-Ready PC through Amazon, Best Buy and the Microsoft Store.

Earlier in March, Oculus also announced that some 30 new VR gaming titles will be available to play on the new devices as the first Rift VR headsets begin shipping.

The Rift is equipped with dual active-matrix organic LED (AMOLED) displays that are designed to provide users with incredible visual clarity as they explore virtual worlds with the device. The Rift also uses an infrared LED constellation tracking system that provides precise, low-latency 360-degree orientation and position tracking for users for accurate and fluid control and operation when playing games and simulations.