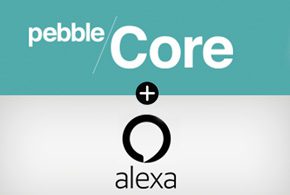 Pebble announced a Kickstarter campaign in May for its upcoming Pebble Core 3G-connected wearable, but the company has now upped the ante with the device by announcing that it will also include Amazon Alexa voice-recognition services to give it more capabilities.

The company describes the Pebble Core, slated to be available in January 2017, as a customizable wearable that will allow users to employ voice control for a wide variety of tasks, from ordering pizza to getting weather and traffic updates, or even to shop for products on Amazon.com. The Core is a small Android device with a button that can be hacked to perform just about any function for users. It also includes an SOS capability that can report the user’s location in an emergency.

“Experiencing Amazon Alexa on-the-go right from Pebble Core is game-changing for wearable technology,” Pebble CEO Eric Migicovsky said in a June 2 post on the Pebble Blog. “We’re longtime fans of the powerful voice services Alexa delivers, and it only gets smarter and more useful over time. It’s an approach we embrace with our own products.”

The integration of Amazon Alexa with the Pebble Core device will create “a fully independent, 3G-connected wearable device” that will be able to connect with wireless networks without a smartphone, directly giving users the information and services they need, according to the company. It can also connect through WiFi and Bluetooth systems. Pebble Core requires no armband to wear and it can stream music via Spotify, while synching GPS data with apps such as Runkeeper, Strave or Under Armour Record.

The Core, initially offered for $69 through Kickstarter before it quickly sold out, will retail for $99 when it goes on sale. Pebble Core Kickstarter pledges are still available starting at $79.

Just since its May 24 Kickstarter launch, the projects have received $10.07 million in funding from almost 53,000 “backers,” which already far exceeds its original $1 million fundraising goal. There are still 26 days left in the campaign as of June 3.

By incorporating Alexa into the Pebble Core device, which is a small, square object that can be attached to a keychain or to a shirt, shorts or other piece of clothing, the Core gains voice control for an almost unlimited number of functions. It can be used to play songs and playlists from Amazon Prime Music, iHeartRadio and other music services; it can brief users on news headlines from publications including USA Today, The Washington Post and The Huffington Post; and it can allow users to review their Pebble Health summaries any time. Alexa can also be used on Pebble Core to control smart-home devices like lights, thermostats and locks, or to answer questions on a wide range of topics on a whim.

“The integration of Amazon Alexa into Pebble Core is exciting to see,” Steve Rabuchin, vice president of Amazon Alexa, said in a statement. “By making Alexa Voice Services available for free to device makers and developers, we knew there would be no limit to the innovative uses.”

Alexa is a cloud-based virtual assistant similar to Apple’s Siri and Microsoft’s Cortana.

In May, Pebble released Version 3.12 of the Pebble App and accompanying watch firmware, giving Pebble smartwatch users many new activity and health tracking options on their Android and iOS devices, according to an earlier eWEEK story. New features for Pebble Time series smartwatches include Pebble Health mobile graphs, which allow users to view interactive charts of their step and sleep activity in a dedicated health section of the Pebble mobile app. Also new is that Pebble Health now automatically detects runs and long walks and can issue a notification, timeline pin and mobile graph data after the activity is completed.