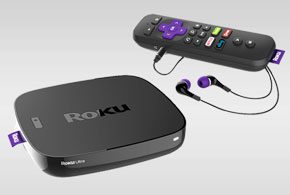 Roku announced on Sept 26 that it has added five new streaming video players to its product lineup, giving customers a wide array of options beyond the company’s original Roku Streaming Stick and its Roku TV models.

The latest streaming players, which range from $30 to $130, are aimed at customers who want to stream video without having to have cable or satellite television services.

The Roku Express and Express+

Priced at $30, the new Roku Express streaming player is the least expensive of the latest devices from Roku and is built to be compatible with HDMI-equipped televisions. The Roku Express features 1080p HD streaming, a wireless remote control with channel shortcut buttons, 802.11 b/g/n WiFi compatibility and comes with an HDMI cable.

Also being offered are the new $80 Roku Premiere and $100 Roku Premiere+ streaming video players, which include HD and 4K video capabilities up to 60 fps streaming. Both devices work with HD or 4K UHD televisions and offer 4K UHD video playback, as well as the ability to upscale 720p to 1080p on HDTVs. Both can also upscale from 720p or 1080p to 4K up to 60 fps on 4K UHD TVs. The Premiere and the Premiere+ features quad-core processors, 802.11ac MIMO dual-band WiFi, wireless remote controls and a night listening mode setting that adjusts audio sounds to maintain volume consistency.

The Roku Premiere+ also features HDR capabilities, which is not found in the standard Premiere player, and a microSD card slot for additional channel storage.

Priced at $130, the new Roku Ultra (pictured) streaming video player includes all the features of the Roku Premiere+ player, including HD, 4K and HDR video playing capabilities and a quad-core processor, while also gaining Dolby Digital and Dolby Digital Plus decoding for use with home theater surround sound, an optical digital audio out port to connect to a receiver or sound bar, and a USB port for local media playback.

“Roku stands for streaming innovation and today we’re celebrating the biggest player launch in our company’s history, including the introduction of the Roku Express player, which delivers a complete streaming experience for a shockingly low price of $29.99,” Anthony Wood, the founder and CEO of Roku, said in a statement. “Whether consumers simply want fast HD streaming via an inexpensive device or are looking for a top-of-the-line player with advanced features such as 4K and HDR, Roku is an easy choice.”

Roku devices use the Roku operating system and provide access to some 3,500 streaming channels, including 350,000 movies and TV episodes in the United States, according to the company. Consumers can use the included remote controls to operate their Roku devices, or they can use iOS or Android apps with their smartphones.

In October 2015, Roku unveiled its previous Roku 4 streaming video player, which received new support for 4K Ultra HD televisions as well as a redesigned exterior, a new feature to help users find the device’s remote control and an innovative feature that allows the Roku 4 to be used when traveling. Roku’s other streaming products at the time included the $50 Roku Streaming Stick as well as the three previous Roku streaming players—the Roku 1 at $50, the Roku 2 at $70 and the Roku 3 at $100.

Roku devices are in a marketplace that continues to get more crowded as companies bring out products to go after expanding video streaming demand from consumers. In September 2015, Apple unveiled a new version of its Apple TV, and in May 2015, Lenovo unveiled its first Cast streaming video hub, which was aimed directly at Google’s $35 Chromecast dongle, Roku’s products, Amazon’s $40 Fire TV stick and other competing devices.