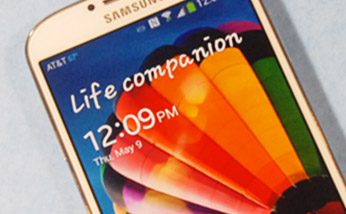 Samsung’s Galaxy S 4 has become what so many other Android smartphones had hoped to be: the device that millions of consumers and even some enterprise customers want to buy.

The handset comes with a 5-inch screen, a 13-megapixel camera, and 4G LTE service. With up to 64GB of onboard storage and a design that has put Apple on notice that it’s a true competitor to worry about, the handset is outstanding.

It’s no surprise, then, that Samsung recently announced that Galaxy S 4 sales have topped 10 million in fewer than 30 days, easily besting the previous Galaxy record set by its predecessor, the Galaxy S3. The Galaxy S 4 is also the fastest-selling Android-based smartphone to-date, making it the de facto leader in the mobile space.

Read on to find out why the Galaxy S 4 is today’s best smartphone:

1. What a beautiful display

Once a person holds the Galaxy S 4 in their hands, they’ll find that it’s one of the most special devices, from a visual perspective to ever hit the market. The device’s 5-inch screen shows colors and fast movement beautifully, and with a 441 pixels per inch, it’s a higher HD than anything the average person has seen. It’s downright gorgeous.

2. Listen to the consumers

Perhaps consumers can help determine what smartphone is truly best for the average person. After all, if 10 million Galaxy S 4 units were sold during its first 30 days of availability, that means the devices has impressed a lot of people in a short period of time. It’s a sign that Samsung truly understands consumers.

Samsung doesn’t simply stick with the standard version of Android in its handsets. Instead, the company delivers its own interface on top of the operating system, called TouchWiz. The idea is to make it seem like it’s a unique version of Android. And with help new software features, like a touchless interface that doesn’t require direct input from a finger, the Galaxy S 4 is an impressive device.

Between the Galaxy S 3 and the S 4, not much changed in terms of product design – just a few key new features. But that’s OK. Samsung has found that people like its product design, since it’s easy to fit into a pocket and it compares nicely to the iPhone 5. Why fix something that isn’t broken?

5. Samsung is dedicated to quality

Samsung has done one of the best jobs in the Android space of delivering a product that delivers real quality to its users. There’s hardly a word mentioned about break downs in the Galaxy S 4 or trouble with it operating as expected. Consumer Reports has even discovered that it’s very reliable. From a quality perspective, the Galaxy S 4 holds up.

When evaluating today’s smartphones, a decision eventually comes down to choosing between the Galaxy S 4 and the iPhone 5. But the trouble is, the iPhone 5 really only wins out if someone wants access to iOS or the Apple App Store. On every other front—including processor speed, camera functionality, screen size, and more—the Galaxy S 4 wins. If an advanced, high-powered smartphone is what a customer is after, choosing the iPhone 5 over the Galaxy S 4 makes no sense.

7. The same goes for the HTC One

The HTC One is being touted as the best competitor to the Galaxy S 4. And for good reason. The device comes with a big display, ample processing power and a nice design. But it took that handset about a month to sell 5 million units. Samsung’s handset doubled that in the same period. HTC hasn’t seized consumers’ attention in the same way as the Galaxy S 4.

8. Take Google’s word for it

Google could have chosen any device to lead its Nexus line into the summer, but at the I/O Conference recently, the company announced that it would offer the Galaxy S 4 as its next Nexus-qualified device. If Google acknowledges that it’s the best handset on the market, why shouldn’t everyone else?

9. It justifies its value

One of the key selling points of the Galaxy S 4 is that it actually justifies its value to customers. As noted above, it comes with a wide array of truly powerful components. And at $199.99 with a two-year contract, it’s a far better value than the comparably underpowered iPhone that ships for the same price. In terms of value, there’s no beating the Galaxy S 4.

10. It finds a way to be mobile-friendly

We started this one out talking about the Galaxy S 4’s big display, and saying that it was ideal for most consumers. Mobile users, however, are sometimes concerned with devices that have such big displays because they wonder if the handset is mobile enough and easy to handle. Well, at just 7.9mm thick, it’s certainly no trouble to throw it into a pocket or purse. Since it only weighs 130 grams, it’s not too heavy. Samsung has found a way to make the Galaxy S 4 both huge and mobile. Nice.