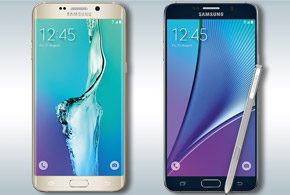 NEW YORK—Samsung’s latest two flagship smartphones, the Galaxy S6 Edge+ and the Galaxy Note 5 phablet, were unveiled by the company in a splashy global “Samsung Unpacked 2015” press event here at Lincoln Center on Aug. 13 that highlighted their improved capabilities and stylish designs.

Both smartphones are extensions of existing flagship models introduced earlier by the company, though they get improved performance and a wide range of upgraded components and features. For the first time, the two devices also share the same basic platform, including the processor, RAM, cameras, battery power and more.

The latest S6 Edge+ and the Note 5 phablet arrive just four months after the long-awaited launch of the company’s redesigned Galaxy S6 and S6 Edge smartphones in April. Both the S6 Edge+ and the Note 5 include 5.7-inch quad HD Super AMOLED displays, 4GB of RAM—up 1GB from previous versions—and more powerful octa-core Exynos 7420 processors. Also included on both models is a 16-megapixel rear-facing camera and a 5MP front camera with additional improvements such as a quick launch feature to capture photos faster with fewer finger taps to unlock the phones. The phones, which are available for preorder immediately, will be sold in 32GB and 64GB versions. They will be available in retail stores and from mobile carriers starting Aug. 21, with prices to be announced by individual carriers.

In addition, both smartphones also integrate the upcoming Samsung Pay mobile payment service, which the company announced will launch in the U.S. on Sept. 28. Samsung Pay is being built to allow users to pay for purchases using their Samsung smartphones in just about every retail location through its acceptance of multiple payment systems, from NFC to traditional credit card readers and swiping terminals, according to the company. Samsung Pay also integrates Samsung’s Knox mobile security platform, which uses one-time codes to authenticate purchases rather than transmitting a user’s personal or credit card information.

The handsets also include Samsung’s new SideSync 4.0 application, which allows users to easily sync their smartphones to a PC or tablet to answer calls, send texts or access files and data, making it easier to live with multiple devices.

The S6 Edge+ has the dual curved side screen edges of earlier Edge devices, while the Note 5 includes an improved and more sensitive S Pen for writing on its screen.

The S6 Edge+ adds a new Edge Apps feature that allows users to store oft-used apps on one of its edges so they can be accessed quickly. In addition to the core features it shares with the new Galaxy Note 5, both devices also share a 3,000mAh battery and run on Android 5.1 Lollipop. The S6 Edge+, which is 6.07 inches long, 2.98 inches wide, 0.27 inches thick and weighs 5.4 ounces, is available in Black Sapphire or Gold Platinum colors.

The Note 5 receives some key usability improvements for its built-in S Pen stylus, improving its performance for users. The S Pen now uses a click to allow easy removal from the phone’s chassis and automatically prepares the display for immediate use once it is deployed. It also features enhanced handwriting and user commands and now has the ability to add shortcuts to frequently used apps. The Note 5, which is 6.03 inches long, 2.99 inches wide, 0.29 inches thick and weighs 6.03 ounces, is available in Black Sapphire or White Pearl colors.

The Note 5 also has an optional snap-on accessory from Samsung that gives the device the tactile feel of a physical keyboard when desired. Easily installed around the phone with a click, it can be detached quickly and clipped on to the back of the phone for storage. Once attached to the Note 5, the plastic keyboard transfers the button pushes from the user’s fingers straight to the virtual keyboard of the smartphone, providing accurate key inputs and giving users another option for using their phones.

The new devices, said Samsung CEO and President J.K. Shin, are part of the company’s efforts to react quickly to the growing requirements of consumers with their smartphones. “We push ourselves to be first and watch others join us,” said Shin. “Today the journey continues. Smartphones have grown more central to our lives. Consumers demand larger screens. We are still betting big.”

In examining the latest Samsung phones, Avi Greengart, an analyst with Current Analysis, told eWEEK that the company is emphasizing the S6 Edge+ and Note 5 because most of its profits come from these models.

“The Galaxy S6 is not selling as well as Samsung needs it to, and profits are dropping rapidly, so the company needs the Note to pick up the slack,” Greengart wrote in an Aug. 13 report. “It won’t—there is not enough new here to grab consumers’ attention and change the trajectory Samsung is on.”

The S6 Edge+, meanwhile, seems to be popular with consumers, Greengart wrote, even though “the dual curved edges make the phone somewhat difficult to hold, and the curvature creates optical distortion that can be annoying.”

Despite those criticisms, “If Samsung can manufacture them in volume, the S6 Edge+ should bring Samsung something it desperately seeks: hardware differentiation that competitors cannot copy,” wrote Greengart.

Samsung has been hit hard in recent years by lower sales of its mobile phones, which have been losing ground to cheaper phones from Chinese handset makers, and from stiffer competition from Apple and other competitors. Much of the recent sales slump likely was due to consumers who were waiting to see the then-new iPhones and Samsung’s own replacement for its earlier Galaxy S5 phone.

Samsung is still trying to figure out how to continue to hold its shrinking lead in the global smartphone market in a competitive atmosphere that has seemingly placed a target on Samsung’s corporate back.

In its second-quarter earnings report, released July 30, the news for Samsung wasn’t great. Revenue in the latest quarter fell 7 percent to $41 billion from $44.5 billion one year ago, and net profit dropped 8 percent to $4.9 billion from $5.3 billion in the second quarter of 2014.

The company’s mobile products revenue, which includes smartphones, fell 6.86 percent in the second quarter to $21.7 billion, down from $23.3 billion one year ago. Samsung does not break out individual numbers for its smartphone and tablets sales. The mobile products unit’s operating profit of $2.36 billion fell 37.6 percent from $3.79 billion for the same period one year ago.

The Q2 news was yet another in a string of disappointing earnings reports for the company as its chief competitor, Apple, continues to rake in huge revenue and profits from its popular iPhone 6 and 6 Plus smartphones. The company had hoped that the April launch of the latest Galaxy S6 and Galaxy S6 Edge smartphones would help it dramatically battle back against Apple’s iPhones, which came out in September 2014.

Samsung even held its special Samsung Unpacked 2015 preview event on Aug. 13, about a month before its normally scheduled September launches, so it can try to beat Apple in the marketplace.