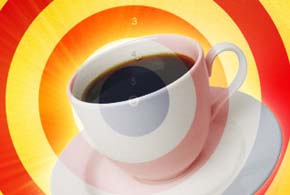 Starbucks has signed on with Duracell Powermat to install wireless charging equipment for mobile phones, tablets and other devices in its coffee shops over the next year, but one shortcoming of the effort is that the systems won’t work with all of the devices being used by consumers today.

The wireless charging initiative was unveiled by the two companies on June 12, with initial installations being made in San Francisco Bay Area Starbucks locations, according to a statement. “The companies will expand Powermat to additional major markets in 2015, with a full national rollout in Starbucks company-operated stores and Teavana Fine Teas + Tea Bars planned over time,” the statement continues. “Initial pilots in Europe and Asia are expected within the year.”

The move is being made to better serve customers by giving them the ability to charge their mobile devices while they are spending time inside the company’s shops. The Powermats, which are flat devices that allow users to place their compatible mobile devices on top of them for wireless charging, will be installed as integrated “Powermat Spots” on tables and counters inside the Starbucks locations, according to the companies. So far, select Starbucks stores in Boston and San Jose already offer Powermat services for early users. The broader rollout of the systems can be tracked so consumers can learn if there are new locations near them.

The Powermat Spots meet the open standards maintained by the Power Matters Alliance (PMA), which is one of several groups that have been working to develop and support competing wireless device charging standards worldwide. Two other key wireless charging groups are the Alliance for Wireless Power (A4WP, which is developing a standard called Rezence) and the Wireless Power Consortium (WPC, which is developing the Qi standard—pronounced “chee”). Each group’s systems are different and are not compatible, according to an earlier eWEEK report. The wireless vendors that support the Powermats’ PMA standards include AT&T, BlackBerry, HTC, Huawei, LG, Microsoft, Qualcomm, Samsung, TI and ZTE, which means that compatible devices built by these companies will be able to use the equipment in the Starbucks stores.

“From WiFi and the in-store Starbucks Digital Network to mobile payment and digital music downloads, we have always tried to anticipate our customers’ needs early in the adoption curve and provide a world-class solution,” Adam Brotman, chief digital officer at Starbucks, said in a statement. “We are thrilled to offer our customers that next level of convenience with Powermat wireless charging. Rather than hunting around for an available power outlet, they can seamlessly charge their device while enjoying their favorite food or beverage offering right in our stores.”

This is not the first technology upgrade that’s been adopted by Starbucks for its customers. In August 2013, the company partnered with Google, which announced plans to install free WiFi inside some 7,000 company-owned Starbucks stores to replace free services that had been previously provided by AT&T. Starbucks stores located in communities that have super-high-speed Google Fiber service have been getting in-store WiFi connections that are even faster—up to 100 times that of existing speeds, according to an earlier eWEEK report.

Starbucks did not reply to an eWEEK request for additional comment about its Powermat initiative.

Two IT analysts, however, said the move is an intriguing one for both companies.

“I think that in a way you could qualify this as a bold yet last-ditch effort by Duracell and some if its partners, including Starbucks, to get their wireless charging standard out there in the marketplace and to try to take on the Qi standard that at this point dominates the market,” said Charles King, the principal analyst for Pund-IT. “Duracell has a few partners, but it hasn’t had the widespread success they hoped for.” One reason for that, he said, is that the Qi standard has been heavily adopted by many Android device makers and “that’s really the standard that has taken the market by storm.”

The move by Starbucks to install Powermats means that consumers who want to use the coming wireless charging services will either have to have compatible devices or will have to buy new devices or add-on adapters that will let them take advantage of the Powermats.

“The problem that I see with this is that the Duracell model has so little market penetration at this point that asking consumers to buy an adapter device … to my mind washes out a good deal of the convenience factor,” said King. “If I have to buy a charging ring to charge my phone at Starbucks, then why not just buy a portable charging pack that I can carry with me and get a full charge off it when needed?”

King said the phased-in rollout being planned by Starbucks could give clues to the eventual success or failure of the effort, since it is slated to begin in hotspot-crazed cities such as San Francisco. “If this doesn’t take off the way the companies hope it will, it wouldn’t surprise me to see the effort gets retired in 12 to 18 months” if success in San Francisco or New York is fleeting.

“This almost qualifies as a stop-gap solution, like a marketing ploy masquerading as a solution,” said King.

Dan Maycock, an analyst with OneAccord Digital, said that while he applauds Starbucks for taking the step of adding wireless charging capabilities in its stores, the feature won’t be widely used by customers until they have the right equipment to take advantage of it, which is a key drawback.

“For regulars in these stores, it makes sense that people might buy the [adapters] to make their devices compatible for now,” said Maycock. “For them it will be a useful thing. I can see them buying a [device-compatible] case and using that” on the Powermats. Of course, those customers will still have to hope that they can sit at one of the tables in the stores that have the Powermats installed. “But for passers-by who may or may not have compatible devices, I don’t know if they will even know what it is. Over time it will be more ubiquitous.”