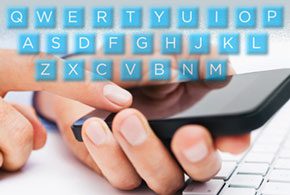 SwiftKey, the onscreen keyboard app for Android and iOS, now has more customization options than before, including the ability to add a background image from a celebrated National Geographic nature photographer.

Users who tire of the stock keyboards on their iPhones and Android smartphones often hop onto their respective app stores and download a new keyboard app. One of the most popular and highly-rated options is SwiftKey, which uses artificial intelligence to translate thumb swipes into complete words.

Over time and with increased use, the app learns from a person’s texting, email and Twitter habits to improve its prediction engine, helping them get the message across much faster than individually tapping each key. More than 250 million people use the keyboard, according to Microsoft, SwiftKey’s parent company.

Courtesy of a new update, those millions of users can now further customize the look and feel of their SwiftKey keyboards.

Both the Android and iOS versions of SwiftKey now feature Photo Themes, which allow users to select their own photos as a background image. To get the ball rolling, the company partnered with distinguished nature photographer Keith Ladzinski on professional-quality images that users can pick for their backgrounds.

“Keith has taken pictures on all seven continents and his work has been featured in National Geographic, Discovery Channel and more. Keith curated a selection of twelve of his shots in an exclusive gallery for SwiftKey users,” stated the company in a Nov. 9 announcement. A preview of Ladzinski’s backgrounds for SwiftKey is available here.

In some respects, SwiftKey embodies some of the positive contributions that AI can make to society, according to the company.

The advent of cloud computing and technologies such as graphical processing units (GPUs) have accelerated the pace of the industry’s AI efforts. The gradual mainstreaming of the technology has caused worry among some people expecting a Skynet-like future, but Microsoft representative Sarah Rowley recently made the case for evaluating AI-enabled technologies such as SwiftKey with a more humanistic eye.

“In 2014, SwiftKey partnered with Intel to upgrade Professor Hawking’s text-to-speech technology. We built him a personal ‘language model’ which learns from him to ensure it predicts contextually relevant words,” blogged Rowley. “This really enhanced that humanizing message—showing people how machine learning can help someone with a disability helps them see [AI] through a different, less alarmist lens.”

That’s not to say that AI can’t run amok.

Last year, Microsoft’s own Tay chatbot trained a harsh spotlight on the immaturity of AI and the people who may exploit its shortcomings. Tay was intended to mimic a fun-loving young American millennial woman with a punchy sense of humor. After some goading from web trolls, Tay took a decidedly darker persona, forcing Microsoft to quickly pull the plug on the AI chatbot.