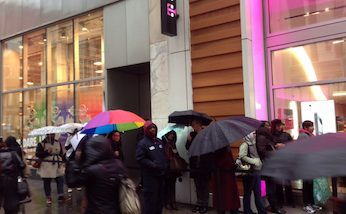 T-Mobile began selling the iPhone 5—its first-ever iPhone—April 12. And while it isn’t sharing sales numbers, it is admitting to having had one of its best-ever sales weekends.

“We just had an outstanding weekend for our business—one of the top two or three best weekends ever for T-Mobile,” Jason Young, vice president of product management at T-Mobile, told eWEEK.

“We dramatically exceeded our own internal projections,” Young continued. “We started fast on Friday and had lines at nearly all of our 3,000 stores, and that momentum continued through the weekend.”

(When asked what the No. 1 best-ever T-Mobile weekend had been for, Young said he couldn’t recall offhand.)

While many iPhone 5 buyers were T-Mobile customers wanting to finally get their hands on an Apple product, “we also had a very healthy number of customers that were new to T-Mobile,” said Young.

He added that while the iPhone brought the lines, the weekend’s numbers were also helped by consumers who were drawn to T-Mobile’s “whole set of ‘uncarrier’ moves.”

“Customers aren’t only coming in for the iPhone. They’re excited about what’s going on at T-Mobile,” said Young. “We saw great sales across a slew of other devices in our lineup.”

Expecting the iPhone to dominate its sales lineup, T-Mobile recently adjusted (aka, lowered) its forecasts for other devices, said Young, but sales didn’t sink quite as expected.

“We ordered far more than we thought we would sell over the first week. But frankly, we are scrambling to ensure we have supply,” he said. While this puts pressure on the business’s supply chain, it’s a good problem, Young acknowledged.

“Call me jaded—it takes a lot to surprise me,” said Young. “But [HD Voice] is really an incredible experience. It’s a true differentiator.”

“We have a faster HSPA+ network than AT&T,” Young explained. “So when you drop down [out of an LTE coverage area], you’re dropping from LTE to 42M bps on T-Mobile. When you drop on AT&T, you’re dropping to 21M bps. On Sprint or Verizon, you’re going to get the same or even slower.”

Things are beginning to turn around for T-Mobile. On April 3, it shared early results from its 2013 first quarter, which included a drastic reduction in the number of customers leaving T-Mobile for other carriers. And as Legere pointed out back in March, all of these changes are happening ahead of T-Mobile’s planned merger with MetroPCS, which is now looking like a done deal.

At the March event, Legere told the press, “It’s time to disrupt the status quo in this industry. … This is about fighting back. It’s about giving people a simpler choice and a better way.”

With an iPhone finally in stores, can subscribers expect iPads soon?

“We’re not commenting on future moves with Apple,” said Young. “But we’ve said we’re going to work with Apple to bring in Apple products.”