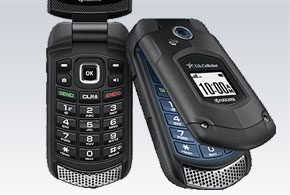 Kyocera’s new DuraXV rugged flip phone is now being offered to customers by Verizon Wireless for users who want a well-built handset without all the features and bells and whistles of a typical, larger and more expensive smartphone.

The DuraXV, which is built for extreme environmental conditions, is certified to meet Military Standard 810G and IP68 to resist dust, shock, extreme temperatures, while also surviving water immersion for up to 30 minutes in up to six feet of water, according to Verizon. The flip phone is also built tough to withstand drops, spills, tumbles and other potential hazards.

The 3G basic flip phone is available for $99.99 with a two-year activation from Verizon in models with a built-in 5MP camera or without the camera for users who are not permitted in their jobs to have a built-in camera, according to the companies.

The DuraXV features a 2.4-inch QVGA TFT display, 256MB of RAM, 512MB of onboard storage, and a 4GB micro SD card for additional storage (the micro SD card slot can support a card of up to 32GB). The flip phone also includes a 1500 mAh Lithium Ion battery. Devices that include the 5MP camera feature auto-focus and digital zoom features.

Also built into the DuraXV flip phone is a tactile keypad and large buttons that make it easy to use with gloved fingers, according to Verizon. The device also includes Kyocera’s Smart Sonic Receiver and dual front speakers, which allow users to hear calls clearly even in noisy environments or outdoor job sites. The handset also includes internal and external displays for improved readability, especially outdoors.

The DuraXV’s ruggedness is certified for use in hazardous work locations (Non-incendive, Class I, Division 2, Groups A-D, T4), so it can go almost anywhere with users.

Also included are built-in mobile Web capabilities, VZ Navigator for GPS and voice-command phone navigation to allow users to get a multitude of services from the handsets.

Also in December, Kyocera had unveiled its ruggedized 4G LTE Android DuraForce smartphone, which is offered through AT&T and U.S. Cellular, according to an earlier eWEEK report. The DuraForce smartphone is also built to take plenty of punishment, including water, mud, shocks, dirt and much more and includes a 4.5-inch, 720p HD, impact-resistant touch screen, a 1.4GHz quad-core Qualcomm Snapdragon 400 processor and 2GB of RAM. It runs on Android KitKat 4.4.2. The DuraForce smartphone also meets IP68 and Military Standard 810G standards and includes a built-in 8-megapixel rear-facing camera with 4x digital zoom, LED flash, auto-focus and 1080p video capabilities, as well as a 2MP front-facing camera with 4x digital zoom. The DuraForce phone weighs 7.06 ounces and is 5.39 inches tall, 2.78 inches wide, 0.55 inches thick and includes 16B of on-board storage plus an external micro SD card slot that supports cards up to 32GB.