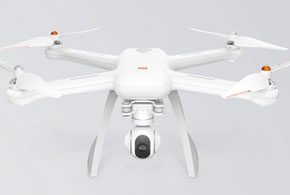 The Mi Drone, which uses four flight propellers and a modular design with folding landing gear, was announced by the company on May 25.

The Mi Drone equipped with the 1080p video camera sells for $380, while the Mi Drone with 4K Ultra HD video sells for $456. Both versions use a 104-degree wide angle lens for video capture, with the 4K camera featuring 3,840-by-2,160p resolution and support for still photo recording in RAW format. They can also capture 720p live video with low latency from up to 1.24 miles away.

The Mi Drone includes a 17.4 volt, 5,100mAh rechargeable battery that promises up to about 27 minutes of non-stop flying time per charge, and a lightweight design that allows the device to be disassembled into several pieces for storage and transport.

The built-in video cameras are attached to a three-axis gimbal system below the drone, with stabilization systems that help keep the video clear and vibration-free, according to Xiaomi. The Mi Drone also includes GPS and its Russian counterpart, GLONASS, as well as a vision-based positioning system, according to the company. Also included is a built-in printed circuit board (PCB) antenna array that allows the craft to remain in control by its operator via remote control over its maximum distance.

The drone includes a multitude of autopilot options, such as automatic takeoff and landing, flight path planning and circling an object on the ground. When battery power gets low, the device is designed to automatically return to its user’s control panel. Operators are also given a low-battery power notice on their smartphone screen.

Built-in real-time location tracking enables the drone to be found and retrieved in the event of a crash or other mishap. Also built in are capabilities for the machine to hover automatically at the edge of no-fly zones so it can’t cross into closed air spaces, according to Xiaomi.

The Mi Drone includes a handheld remote control that allows users to take photos, shoot videos, take off and land automatically, hover in place, and fly in a myriad of flight plans as desired. The handheld remote control includes a mounting platform for the user’s smartphone, which provides on-screen video playback of the scene captured by the camera while the drone is flying.

Xiaomi did not respond immediately to an email inquiry from eWEEK about when the Mi Drone might be sold in the United States.

U.S. officials, including the Federal Aviation Administration, are still in the midst of creating regulations and procedures for commercial drone operations in the country. In April, an FAA committee recommended that some drone flights over humans be permitted if the devices are small enough not to cause serious injuries should a crash occur, according to an earlier eWEEK story. Presently, all drone flights are forbidden over people not connected to the flight of the unmanned aircraft system (UAS), a formal name for drones and other small craft. The FAA will use the recommendations to develop rules for possible UAS flights over people. Public comments will be collected based on the committee’s recommendations as well.

Permission for drone flights over people would be an important requirement for businesses that are waiting impatiently across the United States to begin drone flights for package delivery, building inspections, aerial photography and other tasks. Many businesses have been clamoring for the ability to use drones for several years but have been prevented from doing so until the FAA implements regulations to ensure their safe operation, according to earlier eWEEK reports.

In December, the FAA announced registration rules for operators of small UAS devices for hobby and recreational use who want to legally operate drones that weigh between 0.55 pounds and 55 pounds in U.S. airspaces. The registration process was created by the agency to deal with what it called a growing problem of irresponsible drone use across the country. The FAA created an Unmanned Aircraft Systems Registration Task Force in October to tackle the issue. One of the key goals of the registration requirement is to allow the FAA to be able to identify the owners and operators of unmanned aircraft in U.S. airspace. Registration is a statutory requirement that applies to all aircraft, small and large.

The FAA has been working since 2012 to develop rules and procedures for the commercial use of drones in the United States. The regulations will govern drone flights and keep them safely away from commercial and private aircraft traffic as well as pedestrians and other hazards on the ground.