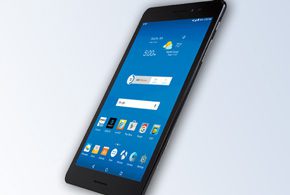 The new tablet, which is made for AT&T by ZTE, will be available starting Aug. 5, according to an announcement by AT&T. The device, which is also available for a one-time payment of $150 without a contract, can be purchased under an AT&T Installment Plan for $7.50 per month for 20 months with an eligible mobile plan, according to the company.

The ZTE Trek 2 HD runs on Android 6.0 Marshmallow and features 2GB of memory, 16GB of built-in storage for music, photos, documents and more, a microSD card slot that accepts cards with up to 128GB of additional storage and dual front-facing speakers with Dolby audio.

The tablet also features a five-megapixel rear camera and a front-facing camera, as well as a 4,600mAh rechargeable battery, quick charging capabilities and a USB-C connector. The machine is 8.46 inches wide, 4.92 inches tall, 0.35 inches thick and weighs 12.8 ounces. The battery will provide up to 10.5 hours of use on a charge, according to AT&T and ZTE.

The machine also includes an app that allows users to watch videos from their favorite channels on DirecTV with a subscription. AT&T acquired DirecTV in July 2015 for $48.5 billion, according to an earlier eWEEK story.

“The Trek 2 HD is designed specifically with entertainment in mind, so you can enjoy your favorite video content when you’re on-the-go,” Jeff Bradley, senior vice president of device and network services marketing for AT&T, said in a statement. “Whether you’re a regular traveler with extra time on your hands for a TV show, or you want to see the latest sports highlights from the comfort of your couch, the Trek 2 HD provides a high quality video experience for less than a dollar with a two-year agreement.”

The latest Trek 2 HD tablet follows the original ZTE Trek HD tablet which was launched by AT&T in May of 2015 as a more affordable alternative to pricier major-brand tablets.

The original Trek HD ran an unmodified version of Google Android 5.0 and had a basic black design that was built to be reliable and affordable.

Both the new Trek 2 HD and the original Trek HD can run all of Google’s standard services, from Chrome to Gmail, Google Apps and much more.

The original Trek HD was priced at $200 for users who wanted to purchase it without a two-year contract.